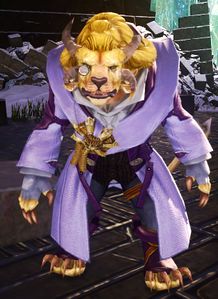 Race
Charr
Location
Hall of Monuments
(Eye of the North)

To love is to want. To desire. And in spite of our differences, all Tyrians possess the appetite of desire. Love is indiscriminate in its numerous, splendorous forms. As an author, it is my duty to depict them all.

Snargle Goldclaw is a charr author of romance novels, many of which feature same-sex or interspecies relationships. He and his junior assistant Bonnie Kunderah have journeyed to the Eye of the North so Snargle can get rid of his writer's block and find inspiration for new novels. 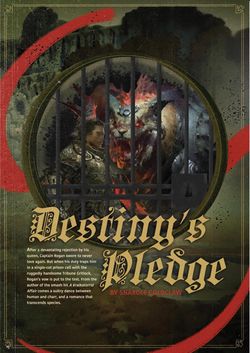 As a charr author, Snargle Goldclaw wanted to depict love in all its forms and to make his readers understand the sensual side of romance. He believed that writing such narratives granted his readers escape from everyday life and let them find a fleeting feeling of fulfillment. Many critics and some readers found Snargle's narratives controversial and pretentious because of his focus on interspecies relationships, extensive use of purple prose, and the characters often being thin allusions to actual Tyrian people. However, the works resonated in the hearts and minds of several other readers who eagerly consumed every Goldclaw novel they could get their hands on.

Lord Faren became a notable patron, and Snargle dedicated the novel The Passions of Faren to him. One particular novel, The Ebonlocke Covenant, caused some controversy among Blood Legion authorities due to the novel depicting a thinly veiled Blood Imperator Bangar Ruinbringer stand-in having romantic feelings for the Iron Imperator Smodur the Unflinching.

In 1332 AE, Snargle and his junior assistant Bonnie Kunderah traveled to Bjora Marches in search of new topics for future novels. Bonnie acted as Snargle's chef, editor and therapist, only coming along due to wanting to learn writing craft from him. She quickly learned that Snargle had little to teach her, and she grew increasingly frustrated due to being stuck with him.

While in Bjora Marches, Snargle fell under the influence of the Elder Dragon Jormag's whispers and got lost in the Far Shiverpeaks. Before he could suffer the fates of the whispers' other victims, the champion Drakkar was slain, which in turn returned Snargle and other surviving victims to their senses. However, the side effect from being influenced by the whispers left Snargle with writer's block much to his frustration. In order to stir his imagination, he decided to travel the world with Bonnie, and ended up at the Eye of the North where they met the Pact Commander in 1333 AE.

Snargle was immediately smitten by the Commander after they had been introduced to one another. He was delighted and impressed when the Commander revealed that they had collected each of Snargle's novels to help Snargle get rid of his writer's block. In response, Snargle stated that he viewed the Commander as the champion of love and an inspiration to him and others. As a reward, he gifted the first copy of his magnum opus, Commander of Your Heart, to the Commander where he alluded to his feelings for the Commander.

Reinvigorated with renewed inspiration, Snargle eventually published a new novel, More Than She Bergen For, which got several charr talking about its sensual content.[1]

Greetings, avid reader! How can I be of assistance? Would you like me to sign a copy of my latest bestseller? Come to hear pearls of wisdom from Tyria's most infamous storyteller? Hm?

I've collected every one of your books.

What are you doing here?

Why do so many of your books explore interspecies romance?

Snargle Goldclaw: You're asking why I choose to write such controversial narratives.
Snargle Goldclaw: When those who are obstinate and obsolete seek to extinguish your voice, then what you're saying must be important.
Snargle Goldclaw: To love is to want. To desire. And in spite of our differences, all Tyrians possess the appetite of desire.
Snargle Goldclaw: Love is indiscriminate in its numerous, splendorous forms. As an author, it is my duty to depict them all.

Are there any reviews of your work?

Snargle Goldclaw: Well, I've been labeled salacious. Vulgar. A defiler of moral sensibilities.
Bonnie Kunderah: Don't forget "pompous and pretentious, a writer whose prose is so purple, it'd make his frivolous characters blush."
Snargle Goldclaw: As I've told you repeatedly, I do not consider "The Divinity Chronicle" to be a reputable journalistic estabilishment.
Snargle Goldclaw: And—and why do you have that rubbish review memorized?
Bonnie Kunderah: I think it's beautifully written. "Sophomoric and tedious, 'A Kralkatorrid Affair' is a narcissistic exertion in—"
Snargle Goldclaw: Bah! Critics. What do they know?

What's your secret to writing romance?

Bonnie said some hurtful things there. (After talking to Bonnie)

Would you look at the time...