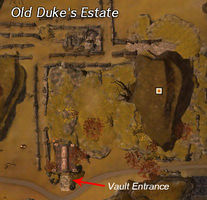 Barradin's Vaults is a point of interest within the Victor's Presidium. This ruined crypt holds the remains of Barradin family whose ghosts still haunt this tomb complex.

The entrance to this crypt is southwest of the map marker. East of the Vir's Gate Waypoint near a bend in the road is a tunnel entrance guarded by five Blood Legion charr - four soldiers and Neci Quicktemper.