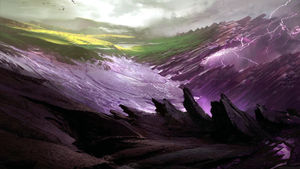 Concept art of the Dragonbrand.

The Dragonbrand, or the Brand for short, is the scar left by the flight path of the Elder Dragon Kralkatorrik since its awakening in 1320 AE. Beginning in the northern part of the Blood Legion Homelands, it stretches all the way through Ascalon, stopping in the northern Crystal Desert where Kralkatorrik fought Destiny's Edge and killed Glint. In 1328 AE, Kralkatorrik flew southeast and continued creating the Dragonbrand as it headed towards Vabbi in Elona for a time. After the Battle of Kodash Bazaar in 1330 AE, Kralkatorrik's western migration spread the Dragonbrand through Kourna, finally ending at a mountain southwest of the Sulfurous Wastelands.

The land marked by the Dragonbrand has twisted into a hazardous crystallized version of what it once was; trees and shrubs have morphed into luminous, glassy shards, chunks of glowing amethyst and patches of earth consumed by lava-like swirls. The sky above is scorched with rolling thunderstorms called the Brandstorm—the clouds blot out the sun's light with lightning that tears and strikes at random. Creatures have also been affected by the Dragonbrand, all transformed to become the Branded, terrifying crystalline servants of Kralkatorrik.

Dragonbrand is being contained by charr forces known as Sentinels in Ascalon. Warbands and individuals are known to volunteer for this duty, and they are also known to receive transfer from the Brand for less taxing duties as a reward of service.

The path of the Dragonbrand across Ascalon and the Crystal Desert in 1331 AE.