This item allows selection of stats. See below for a list of available prefixes. • Superior Sigil of Strength • Unused Infusion Slot — In-game description

This item allows selection of stats. See below for a list of available prefixes.

Claw of the Khan-Ur is a legendary dagger crafted in the Mystic Forge.

Reforged stronger with every great feat its wielder accomplished, this ancient charr relic is an amalgamation of ambitions. It has served as an apparatus of revolution, a key to power, and a symbol of stability. Build a piece of history, and its future will be in your hands.

The Claw of the Khan-Ur is an ancient charr artifact that is highly valued among the High Legions, originally the weapon of the first Khan-Ur. It is a symbol of charr unity, signifying the last time when the charr were fully united.[1] It is an ungue, a four-bladed weapon with a central grip, having two blades above and two blades below the handle. The Claw's handle is made out of gold, with four gems set at the base of each handle; red, black, gray, and gold, for each of the children of the first Khan-Ur who founded the High Legions.[2] It also contains a part of the original Khan-Ur.[3]

In 1090 AE, it was wielded by the Flame Legion Imperator who laid siege to Ascalon City with the hopes that ending humanity in Ascalon would give him claim to become the new Khan-Ur. However, King Adelbern unleashed the Foefire and wiped out the assault along with his own soldiers and citizens. Adelbern, now a ghost, took the Claw of the Khan-Ur and locked it away within a vault below the Foefire's Heart.

In 1324 AE, Queen Jennah commissioned the Vigil to retrieve the Claw of the Khan-Ur in order to promote peace talks between humans and charr. The Vigil in turn hired Dougal Keane, the sole person to escape the city alive prior to then, to lead the expedition into the city to retrieve the Claw. After being retrieved, the Claw was given to Imperator Smodur the Unflinching of the Iron Legion as human part of a peace treaty. It now sits on the main table in The War Council.

Due to the Claw of the Khan-Ur having been lost for hundreds of years, it is now unknown to the populace whether the Claw holds magical power, or if it is merely a symbolic weapon that gained legends or was even imbued with magic over time.[3]

Gift of the Four Legions
1

Show base ingredients
Claw of the Khan-Ur

Gift of the Four Legions
1 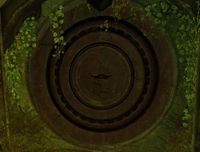 Mural on the inside of the vault

Bug:
Currently, Claw of the Khan-Ur animation on critical hits does not work for Soulbeast dagger skills.