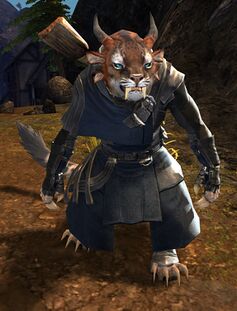 Mia Kindleshot is a tribune of the Iron Legion who has been one of the driving forces behind the Ebonhawke Treaty.

While in the Iron Legion, Mia Kindleshot eventually became one of the legion's tribunes. She is considered to be one of the most respected Iron Legion tribunes alongside Bhuer Goreblade and Fume Brighteye.[1]

Mia was said to have been instrumental in arranging the original ceasefire between charr and humans, and pushed the powers that be to sign the Ebonhawke Treaty.[2] Although Mia's efforts won over many charr who sided with the pro-treaty faction, several other charr in the Iron Legion, notably Fume, made their dislike about the truce clear.[3]

Because of Mia's contributions to the ceasefire, she was invited to a party at Minister Caudecus's manor that celebrated the peace negotiations in 1325 AE. As a representative of the Iron Legion, she acted as the charr ambassador to Kryta.

The party was interrupted by Separatists who kidnapped Queen Jennah and several ambassadors. Mia was placed in a cage where she was to be kept alive until Separatist Captain DeLana had finished her business with the captive queen. Logan Thackeray, Zojja and the Pact Commander freed the tribune who told them that the queen had been taken farther up the valley behind the manor. The queen was saved and the Separatists were defeated, allowing Mia to return to her duties.

As tribune, Mia was part of the defense quorum convened between Imperator Smodur the Unflinching and the tribunes within Ascalon to deal with the threat of the Molten Alliance in 1326 AE.

Leading Iron Legion forces in the area under Imperator Smodur's orders, Mia joined the Pact Commander's allied forces in the assault on the Elder Dragon Kralkatorrik at Thunderhead Peaks in 1332 AE. Upon meeting the Commander in Thunderhead Keep, she expressed the Iron Legion's interest in killing the Elder Dragon and listened to the Commander's speech before participating in the battle. During the battle against the Elder Dragon and the Branded, Mia fought alongside Logan Thackeray, Boticca, and Rox. She survived the battle and went back to High Legion territories after the dragon Aurene's apparent demise.

During the charr civil war between the Dominion and the United Legions in 1333 AE, Mia remained loyal to Imperator Smodur. She attempted to have herself reassigned to Drizzlewood Coast where Smodur and the other imperators were located, causing Smodur to reply that she was pushing dangerously close to attempting to order him around. Within the letter Smodur had sent back to her, Mia was rebuffed for this and told that the other imperators believed that killing rogue imperator Bangar Ruinbringer would collapse his Dominion forces, while Smodur claimed that he knew that they would respect force.[4]

After Smodur's death, Imperator Malice Swordshadow of the Ash Legion noted that Mia would most likely be the next Iron imperator as Smodur had trusted her. However, the United Legions were unable to contact her in time for the assault on Bangar's base of operations at the Frost Citadel, and so she did not succeed Smodur as Iron Imperator immediately.[5]

If not charr
Commander! The Iron Legion stands with you! We're currently discussing the best way to coordinate our forces.

Good, glad you're with us. I'll see you all on the front line.

If charr
Mud and blood, if it isn't the commander! Imperator Smodur sends his regards. Says if today's the day that overgrown crystal bastard falls, the legion's gotta be there. Hence, me 'n' the warband.
(If Ash Legion)

Well, this Ash Legion soldier is glad to see you, Tribune.

I'm sure the rest of Ash would be here if they could...but they have the best representative of their corps leading this battle. I'm sure you'll do them proud, Commander.

That's the plan. Carry on, Tribune.

I'm sure Rytlock would join me in saying we're glad for the help, Tribune.

Blood Legion never passes up the chance for a good scrap. Too bad the rest of the legion are still tied down in Ascalon, but I'm sure you and Brimstone will do enough damage for the rest of 'em. Heh!

There's nothing we do better! Back to it, soldier.

Always good to have my legion mates at my back. Glad you're here, Tribune.

Wherever Iron goes, we leave the broken wreckage of our enemies behind. We wouldn't miss this moment for anything. You can rely on us in the battle ahead, Commander.

We are Iron Legion!

Welcome to the war, Tribune. As you were!