This article is a personal Living World Season 1: Scarlet's War redesign by Lon-ami.

Living World Season 1 was a series of live content events that ran from November 2012 to May 2014. It chronicled Scarlet Briar's war on Tyria, culminating in the destruction of Lion's Arch and the awakening of Mordremoth. The story was designed to be experienced as it happened, making it impossible to replay like the following seasons.

The goal of this article is to adapt the events of Season 1 into a replayable episodic format, staying as faithful to the original material as possible.

Some of the events can not be reintroduced properly using the current world. This problem will be solved through alternate instances depicting the original locations, accessed from a new hub: The Field of the Fallen.

During the aftermath of the Battle for Lion's Arch, the White Crane Terrace became an improvised graveyard for the victims. Once the city was rebuilt, the graveyard became a memorial, built to remember everyone who lost their lives defending Lion's Arch.

Named Field of the Fallen, the monument has since stood proud; up until recently. The magical disturbances across all of Tyria have affected the memorial as well. All the pain and the suffering of those who fell beneath Scarlet's wrath has manifested as portals to the Mists, where those brave or foolish enough can relive the tragic events of Scarlet's War, not just on Lion's Arch, but all over the continent.

Portals to six major events have manifested at the memorial, each reliving some of the greatest battles of the conflict:

Cross the portals, right these wrongs, and let the dead rest in peace again.

Braham fights against a Molten Effigy.

Something stirs in the Sea of Sorrows. A new organization, called the Consortium, sent an expedition to an uncharted island, awakening some mysterious creatures known as the karka. Now Lion's Arch is in danger, and Inspector Ellen Kiel is looking for the only one who might know where the karka are coming from: The leader of the failed expedition, a sylvari by the name of Canach.

The Flame Legion and the Moletariate have joined their forces into an unstoppable war machine: The Molten Alliance. Norn homesteads and charr settlements are falling, wiped one by one. Refugees are pouring in from Wayfarer Foothills and Diessa Plateau, collapsing Hoelbrak and the Black Citadel. Join Braham and Rox and stem the tide before it's too late.

It's time for retribution! The Vigil has found the entrance to the Molten Furnace. Rescue the charr and norn prisoners, and strike back against the heart of the Molten Alliance.

Episode 4 - The Secret of Southsun[edit] 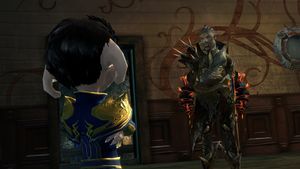 What started as a Consortium relief effort to relocate refugees into Southsun Cove, now turned into a tourist resort, has turned into a full-blown conflict once the new settlers discovered the fine print of their contracts. To make things worse, someone is stirring up the local fauna, driving the karka and other creatures into a blind rage. The situation is about to explode, and Inspector Ellen Kiel is looking for help.

The citizens of Lion's Arch celebrate the fall of Zhaitan with a brand new festival. Little do they know, a new crew of pirates walks among them, waiting for the right moment to strike: The Aetherblades.

Episode 6 - Bazaar of the Four Winds[edit]

Captain Ellen Kiel is running for office, and her victory relies on a trade agreement with the Zephyr Sanctum. However, she's not the only one shooting for the seat. Evon Gnashblade of the Black Lion Trading Company has his own plans as well, and he will not let Kiel get her way easily. 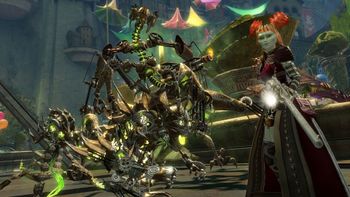 Scarlet Briar and her Twisted Watchworks.

Kryta celebrates ten years of Queen Jennah on the throne. The Crown Pavilion gladiatorial arena and the Watchknight constructs have been commissioned for the occasion as a shining symbol of humanity's endurance. From the shadows, a mysterious figure watches the festivities, planning to take these new toys for herself. She's the true leader of the Aetherblades, and her name is Scarlet Briar.

Another unholy alliance enters the scene: Nightmare Courtiers and Krait have joined together to form the Toxic Alliance. Carefully hidden by magic, they have been working tirelessly on a terror unlike anything seen before: The Tower of Nightmares. Help Marjory Delaqua and Kasmeer Meade breach into the tower, and put and end to this madness.

Scarlet Briar has rallied her allies and is back on the move, but what are her plans?

Lion's Arch deals with the aftermath of Scarlet's War.

Lion's Arch is burning, and Scarlet's Alliance has taken control of the city. The Lionguard and the Orders of Tyria rally their forces to take it back. Scarlet Briar watches from above, aboard the Breachmaker. The final battle of Scarlet's War is here at last.

Side Story - Song of the Zephyrites[edit]

Scarlet's War is over, and Lion's Arch lies in ruins. The Zephyrites and Divinity's Reach are hosting a festival to support the city's reconstruction efforts. The heroes of Lion's Arch gather and join the celebrations. New recruits join the Zephyr Sanctum on their next voyage, among them a soundless by the name of Aerin.

Includes various achievements and instances dealing with the aftermath of the Battle for Lion's Arch, and bridges the story between Season 1 and Season 2. 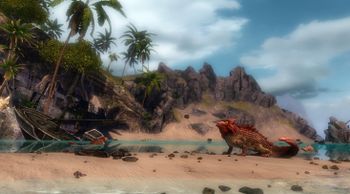 Visit Southsun Cove and relive the conflict between the Settlers and the Consortium.

Support the Lionguard by staying neutral, or take a side, and either support the Settlers and their claims, or support the Consortium and pacify the rioters. The side you're on will determine the disposition of the NPCs and your role during the different events of the conflict, maybe even getting to brawl against other players as well. The meta event is on a two hour timer.

Do not forget to claim unique rewards from your supported faction once you are done, and use your Solvent Sprayer to dissolve the mounds of karka webbing and uncover resource nodes, chests, and other valuable jetsam across the island. 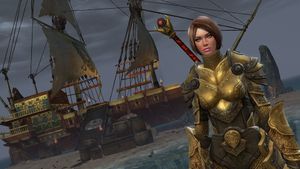 This zone can be accessed anytime from the Consortium asura gate at Coriolis Plaza in Lion's Arch, or by waypoint after the first visit. 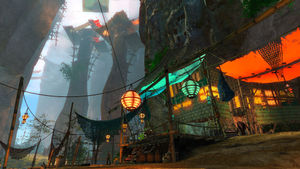 Welcome to the Bazaar of the Four Winds.

Visit Labyrinthine Cliffs and relive the Bazaar of the Four Winds and the Captain's Council election.

Players of each world will be automatically assigned to either Team Kiel or Team Gnashblade each day, in a rotation similar to that of World vs. World. The population of each map instance will be divided evenly between the two teams, which will compete against each other in different events, adventures, and activities. Matches will be individually tied to each map instance, and will last for one hour. Score and time will be tracked by the zone's map meta event.

Every player in the zone will get a reward upon the match's ending, scaled depending on his participation. The players of the winning team will get an additional reward for their victory. 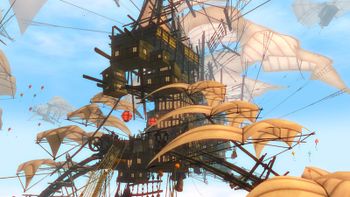 The Zephyr Sanctum, home of the Zephyrites.

This zone can be accessed anytime by boarding the bazaar ship at Sanctum Harbor in Lion's Arch, or by waypoint after the first visit.

Relive the assault against the Toxic Alliance and their Tower of Nightmares in Kessex Hills.

The zone has two meta events, the first outside the tower, and the second inside of it. The first meta event's progress is player-driven, finishing earlier the faster players complete the various events. Upon completion, the way into the tower is opened, and the second meta event starts.

The second meta event has a variable timer, based on completion of secondary bonus objectives. The better the performance, the longer it takes for the time to run out. Players will fight their way to the top of the tower, receiving a higher reward each time they clear a floor. They can also complete various Nightmare Chambers for extra rewards. When the timer runs out, players will be kicked from the tower, and the first meta event will restart. 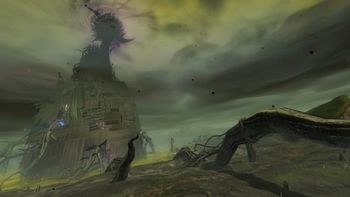 The Tower of Nightmares in Viathan Lake.

A Toxic Damoss protects the entrance to the tower.

This zone depicts Kessex Hills during 1326 AE, and can be accessed anytime from Field of the Fallen in Lion's Arch.

Relive the Battle for Lion's Arch and the bitter finale of Scarlet's War.

You can explore the ruined city whenever you want. Dig Rubble Piles to unearth Found Belongings and Found Heirlooms, and trade them to special merchants in exchange of unique rewards. 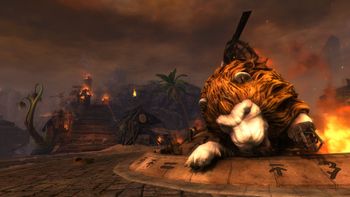 The Lion's Court lies in ruins. 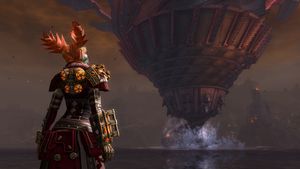 This zone depicts Lion's Arch during 1327 AE, and can be accessed anytime from Field of the Fallen in Lion's Arch. 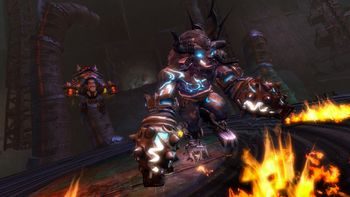 The Molten Firestorm and the Molten Berserker.

Relive the assault against the Molten Alliance and their Molten Furnace.

This dungeon can be accessed anytime from Field of the Fallen in Lion's Arch. 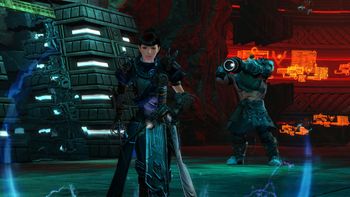 Relive the assault against the Aetherblades and their Aetherblade Retreat.

This dungeon can be accessed anytime from Field of the Fallen in Lion's Arch. 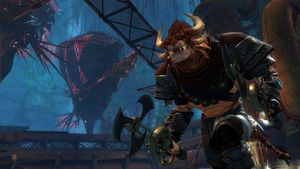 Visit Twilight Arbor and relive the assault against Scarlet Briar and her Holopirate Factory.

This dungeon can be accessed anytime from Wychmire Swamp in Caledon Forest.

The Ancient Karka watches over the Karka Hive.

Relive the invasion of Southsun Cove by the Lionguard and the Consortium, and face the Ancient Karka in combat.

This world event runs on its own exclusive zone instance, depicting a portion of Southsun Cove during 1325 AE, which can be accessed anytime from Field of the Fallen in Lion's Arch.

The Twisted Marionette descends from the Breachmaker.

Relive the fight against Scarlet's forces and her Twisted Marionette in Lornar's Pass.

This world event runs on its own exclusive zone instance, depicting a portion of Lornar's Pass during 1327 AE, which can be accessed anytime from Field of the Fallen in Lion's Arch.

Part of the Ruins of Lion's Arch zone above. 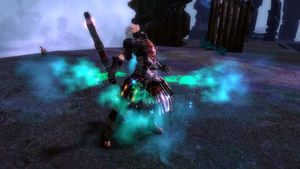