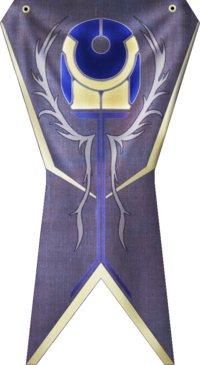 Your satisfaction is our desire.

The Consortium is a multi-racial mercantile corporation established by the asura. Before the destruction of Lion's Arch, their only known base of operations was the Consortium Gift Shop. The Consortium is focused on making money, though openly they say they are mainly interested in pleasing customers, and have shown to back out of anything which can give them a negative view or loss in profit[2][3]—even abandoning their own members.

The Consortium claims to be financially supporting Dessa and her krewe in the Fractals of the Mists, though Dessa's attitude toward and history with the organization bring this claim into question.[4][5]

Section-stub. This key section of the article is incomplete. You can help the Guild Wars 2 Wiki by expanding it.
Reason: Add more information from game dialogues.

The Consortium's main goal appears to be about building up its brand name and making profit without ethical considerations to their employees, customers, people bound by their contracts, or the environment at large. The corporation is neither good nor evil; it is capitalist first and foremost, and it is unknown if its higher-ups have any secret agenda.[3] Rivals of the Black Lion Trading Company, the corporation promotes a customer-friendly and luxurious image of itself even though its products, vacations packages and other services tend to be subpar more often than not. The Consortium is quick to deny any accountability in case its plans go awry while invoking the clauses in non-disclosure agreements to deny information about the nature of the corporation's projects.[6]

The Consortium provides varying levels of accommodations for its employees based on their previous year's performance.[7] Employees who perform poorly either get demoted and are reduced to living in below average apartments or, as per Consortium lingo, are "encouraged to seek employment elsewhere".[1] Interns generally do not get paid time off.[8]

The corporation uses complex legal contracts to mask their intentions such as when they tricked refugees to settle Southsun Cove with a seemingly fresh start while also using the clauses in the contracts to force the refugees to work for the corporation as free labor on the island. Employees or other people bound by contracts who break the terms are dealt with harshly, sometimes even with lethal force as seen when Subdirector Noll sent mercenaries to kill ex-employee Canach who had broken his nondisclosure agreement and told Lionguard investigators about the Consortium's role in accidentally provoking the karka to assault Lion's Arch.[7]

The Consortium has a wide variety of titles for its employees, indicating a complex corporate hierarchy consisting of chairmen, directors, subdirectors, assistant subdirectors, subassessors and the like. Little if any information is provided to the general public about the identities of the Consortium's top decision-makers who are rarely seen in public,[3] so much so that the only thing known about the Consortium's founder is that he is male and that he has supposedly not been seen in years while Chairman Macro has been quoted as saying that Chairman Boll is "calling the shots."[8]

Little is known about the Consortium's origins other than it was already operating when Dessa was studying the Fractals of the Mists at an unknown point in time when sylvari either did not exist yet or were not widely known to her krewe.[9] Given how this multi-racial mercantile corporation's logo depicts a golem, it appears to have been founded by asura although the identities of the founder, who is referred to as male,[8] and the highest-ranking Consortium members appear to remain unknown to the general public.[3] Dessa calling the Consortium mere "small-time hooligans and thugs" suggests that she may have witnessed the Consortium's first, modest years before the corporation grew into its current, influential size in the following years.

Some time after the death of the Elder Dragon Zhaitan in 1326 AE, a group of Consortium employees, consisting of Captain Cady Swift, First Mate Bastus Sharphorn, Derrik, Owain, Pippa and Tressa Wolfhorn,[10][11] headed to the uncharted island of Southsun Cove in the Sea of Sorrows on the orders of Canach on behalf of the leaders of the Consortium.[3][6] While on Southsun Cove, the crew encountered karka, aquatic creatures hailing from the depths of the Unending Ocean, and them venturing too deep into karka hive territory and gathering strange flowers with a frenzying scent provoked the karka which retaliated lethally. Most of the crew died, apart from Owain, who lost her grip on reality and began making omelets out of the eggs of the karka, and Canach who fled back to the mainland.

Angered by the Consortium's actions, the Ancient Karka attacked Lion's Arch, the location where the crew had sailed from, and destroyed the lighthouse in revenge. Facing this sudden invasion, the Captain's Council mobilized the Lionguard to spearhead an effort to exterminate the karka before the aquatic crustaceans could destroy the city, while the Consortium invoked their non-disclosure agreeements and refused to divulge the exact nature of their mission to Southsun Cove. Investigations led by Inspector Ellen Kiel and Researcher Levvi revealed clues about the Consortium's involvement with the karka attack, prompting the pair and helpful adventurers to explore the matter further while studying the karka for any weaknesses and preparing for the invasion of Southsun Cove.

The Lionguard and adventurers eventually interrogated Subdirector Blingg and Subdirector Noll, apprehended Canach whom Noll had named as the main culprit for the karka attacks, and slew the Ancient Karka to send the rest of the karka into disarray. Following these events, the Consortium claimed Southsun Cove as a resort and began planning to sell island vacation packages to would-be tourists.

After the attacks of the Molten Alliance in the Shiverpeak Mountains later that year, the Consortium saw an opportunity to make a profit from the crisis. As the vacations packages had not sold as well as their analysts had estimated, the corporation resettled the refugees to Southsun Cove, promising "deluxe accommodations fit for royalty" and a "fun-filled island safari" although in reality the accomodations were not only as luxurious as promised but also surrounded by aggressive wildflife.[12] Upon the refugees' arrival in Southsun, the Consortium made them sign a contract amounting to "no refunds",[13] and the settlers began to riot once they realized how dangerous Southsun Cove actually was and how the contracts' fine print forced them to work as cheap labor while being unable to leave the island as per legal agreement.[7][3] The Consortium responded to the riots by trying to violently quell them, forcing visiting adventurers to try to prevent the violence from escalating by calming down both factions.[14]

Around this time, Canach had become a fugitive as Subdirector Noll wanted him dead for provoking the karka and ruining the Consortium's image with the subsequent karka invasion of Lion's Arch and via revealing the purpose of the corporation's expedition to Southsun Cove despite the nondisclosure agreement. Canach disposed of the mercenaries sent after him, however, and forced Subdirector Blingg to reveal Noll's plans for the Southsun refugees as well as where the contracts binding the refugees to the island were kept.[7] Remembering how the strange plants he had collected earlier had provoked the karka into attacking, Canach used the same plant-based reagent to artificially goad the local fauna into violent attacks in order to disrupt Consortium operations on the island.[15]

Canach was eventually cornered and taken into Lionguard custody by Ellen Kiel and the Pact Commander; he justified his actions by claiming that he had sent Noll a message and intended to free the refugees bound by the Consortium's clauses.[16] Although Ellen did not publically support Canach's terrorism, she felt sympathy for his end goals as she, too, had seen how the refugees had been forced to work for the Consortium. To keep up appearances, Ellen seemingly intended to ship all the legal contracts off the island as a safety measure but also rigged the ship to explode to destroy the contracts, thus freeing the settlers from any legal ramifications and putting an end to the civil unrest on the island while she played innocent much to Noll's frustration.[17]

After the destruction of Lion's Arch and the death of Scarlet Briar who had assaulted the city, the Consortium was contracted to aid in the rebuilding of the city. The corporation sent out Consortium Planners and Consortium Surveyors around the ruins to take measurements for the reconstruction. Once the rebuilding was finished, the Consortium relocated their base to a new building in the Commodore's Quarter overseen by Chairman Boll.[18] Discussion among Consortium employees at the time referenced how the founder of the Consortium had not been seen in years while Chairman Macro had supposedly assured worried employees that Chairman Boll was in charge.[8]

After the death of the Elder Dragon Mordremoth in 1328 AE, the Consortium took an interest in the strange ley line activity that was beginning to occur.[19] After some trial and error, they constructed a device to collect the Ley Energy. Subsequently, a few models were then stolen by the Inquest and others were bought by the Durmand Priory. Alongside collecting ley energy, the Consortium also sent out a tracker to remote Verdant Brink to scan for Bloodstone magic released by the destruction of the Maguuma Bloodstone in 1329 AE.[20]

Some days before the All-Legion Rally of 1332 AE, the Consortium set up a protection initiative to deal with powerful threats throughout Tyria, and offered to reward handsomely any adventurers that contributed to their initiative by paying Consortium officers stationed in major cities with Champion Marks.

After the deaths of the Elder Dragons Jormag and Primordus in 1334 AE, the Consortium began promoting the Fractals of the Mists for commercial purposes. Assistant Subdirector Rannu and Director Ygrun, the first higher-ranked Consortium member to appear in public yet, stood near the fractal gate to inform adventurers and curious onlookers about the Consortium's latest initiative to stabilize fractals and the rewards associated with it. When questioned by the Pact Commander who was curious about the Consortium's sudden growing interest in fractals, both Rannu and Ygrun were quick to dodge the inquiries while daring the Commander to take part in the initiative as well. Once the event was over, Rannu commented that the directors had gotten what they wanted out of the fractals but did not divulge any more information regarding the subject.