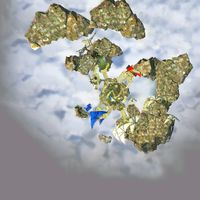 Aspect Arena is an activity located in Labyrinthine Cliffs.

Players are separated into two teams placed on opposite sides. Each side has three elemental crystals representing the three aspects: wind, sun, and lightning. The aspect crystals grant five distinct abilities associated with their element. Within the arena, there are six spawn points for attunement crystals, two of which will be active at any given time. If a player can take a crystal back to the aspect crystals within their base, their team gains 50 points. Player kills count for 1 point. The team with the most points when the timer runs out wins. Players who are carrying a crystal are under the effect of Aspect Crystal.

All players are limited to 100 health and have all healing, utility, and elite skills locked. Thus the only skills available during the event are the aspect skills.

The movement skills in slot 5 use up endurance. Assisted Leap and Lightning Tether uses 50 points. Speed of Light uses 40 points.

During Festival of the Four Winds 2018

During Festival of the Four Winds 2014

The following achievements were obtainable during Festival of the Four Winds 2014 and Cutthroat Politics: