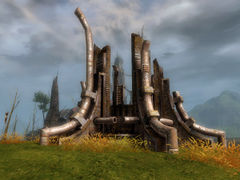 Energy Probes are devices that Scarlet Briar created out of Molten Alliance magitech. She spread them across Central Tyria after the destruction of the Tower of Nightmares, using their seismic readings to determine where ley lines are located beneath the surface. When deployed, they were protected by a force field that adventurers could not penetrate, however, after the release of the Twisted Marionette a method around the force field was discovered and members of Scarlet's Alliance were sent out to repair, maintain, and defend the energy probes until they could fulfill their purpose.

Though the Energy Probes' purpose was to locate ley lines, they had the side-effect of disturbing subterranean life and awoke the ancient great three-headed wurm in Bloodtide Coast. Eventually, an energy probe in the depths of Sanctum Harbor located a hub of ley lines, which led to Scarlet Briar's attack on Lion's Arch that devastated the city.

This probe appears to have self-destructed.

Before The Origins of Madness[edit]

On knockback interaction
What part of "DO NOT TOUCH" was unclear?

On defeated interaction
Tsk, tsk. Let that be a lesson to mind your own beeswax.