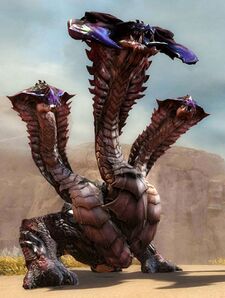 Hydras are three-headed quadruped reptiles that inhabit hot and arid locations such as the Crystal Desert. Some are attuned to the usage of fire or ice magic, while others channel the Ley energy. They're powerful foes, and have been the death of many unobservant adventurers over the centuries.

In the past, hydras were also seen in the burnt lands of Ascalon as well as the Ring of Fire islands.

Bug:
Most unnamed Champion and Elite hydras change their name and rank mid-fight. Their skills and drops stay the same, however.