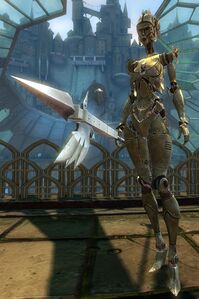 Watchknights are mechanical constructs created by the kingdom of Kryta.

They were first unveiled by Queen Jennah during her jubilee, as her gift to Divinity's Reach and a symbol of humanity's renewed bonds of community, duty, and shared destiny. Jennah unveiled them at the opening ceremony of her jubilee ceremony, where one was tested against Logan Thackeray in combat, and the "enemies" in the Crown Pavilion were in fact mostly Watchknights under the effect of mesmer magic.

During the closing ceremony, Scarlet Briar hijacked control of the Watchknights and used them to create voice-controlled Twisted Watchwork creatures. It was later discovered that the watchknight's vulnerability to sabotage was due to their similarity to steam creatures, which were in turn Scarlet's own creations. It was later revealed that Scarlet had shown interest on studying with the engineer who designed the watchknights, but was rejected, which bridled her anger.

After the jubilee incident, the watchknights were deactivated for investigation and overhauls, which were overseen by nobles such as Lord Faren, to ensure that they could not be hijacked again. The watchknights were brought back out into the public during the first Festival of the Four Winds, though only for the fundraiser event and were decommissioned once more.

The incident with Scarlet was used by the White Mantle as propaganda against the queen. The new and improved watchknights would return again shortly thereafter, defending Divinity's Reach and Lake Doric from the White Mantle assault.

The newer Watchknight Mk II model was introduced during the second Festival of the Four Winds.