This article is about the game mechanic. For other uses, see Repair.

Every time you die, your armor becomes less durable. Repair your armor at an equipment repairs NPC or anvil to keep it in peak condition.

Repairs is a game mechanic that removes the penalty for being defeated. 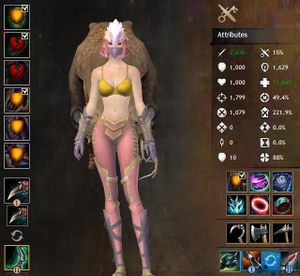 When defeated, one random piece of equipped armor (including back items and Aquatic Headgear) will become damaged. This has no negative effect on the character - damaged armor still provides its full defense and attribute bonuses.

After all equipped pieces of armor are damaged, items will randomly become broken when defeated. Broken armor provides no attribute or defense bonuses, but upgrade components continue to provide their normal effects.

Damaging and breaking armor does not occur when:

The current state or status of a character's armor may be displayed using the equipment tab of the Hero panel. Damaged armor is indicated by a

yellow shield over the item icon. Broken armor is indicated by a

red shield over the item icon and is not displayed on the character.

Damaged and broken equipment may be repaired at no cost:

Great, fix me up!

Good as new! Unless you start up bear-wrangling, this should last you a while.

That won't be a problem. Thanks.

Before unlocking the repair function on your character:

What do you mean by "damaged" armor?

You don't have to worry about this yet, but suffering a defeat in battle will damage your armor. Visit me and I'll have you up and running in no time!

I'd like to sell a few things. (same as below)

All right, show me your wares.

That's all I needed. Thanks.

Bug:
If a piece of legendary gear is worn in multiple templates, being damaged or broken in one template but not damaged in the template currently being used, the game will not allow repairing that gear showing the dialogue Looks like you can't afford the repair cost. The player must equip the template in which the legendary gear is damaged to be able to repair it.

An NPC's repair dialogue box during the beta with available funds and repair cost.