This article is about the release. For the achievement category, see Shadow of the Mad King (achievements).

Halloween has a long history in Tyria, and in times past was always marked by the spirit of Mad King Thorn cavorting among the people unleashing his own brand of insanity. However, it's been over 250 years since he was last seen, and for most people he is merely a figure of folklore. Despite this, rumors persist among the populace that something wicked this way comes.

Shadow of the Mad King is the first major game release for Guild Wars 2 and will go live on October 22*. This new game update will include a number of new features for all of our players to enjoy, new content to explore and see, and a week-long Halloween event.

Shadow of the Mad King was a Halloween-themed release and the first major update for Guild Wars 2 that went live on 22 October, 2012. It included a number of new features, new content to explore and see, and a week-long Halloween event.

It was the first festival to occur in Guild Wars 2, released as the theme for the holiday and follows the events of the return of the Mad King, which was spread across the length of the event. A short teaser was released prior to the event, depicting a decorated Lion's Arch.

Due to Hurricane Sandy, which hit northeastern United States at the end of the event, a special NPC remained until November 15th to allow affected players (or any player who missed the event) to obtain the final achievement and the holiday hat.[2]

The Halloween event began on October 22nd and lasted until 3:00 AM on November 2nd, 2012 (UTC). The event was presented in four different acts which focused on the return of Mad King Thorn and delved into his backstory. 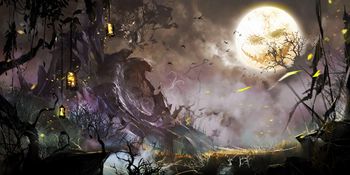 Players receive a Halloween mail about the event.

Talk to Magister Tassi in Lion's Arch. Tell her you're ready and you will get a mail starting Act 1. You will start the the scavenger hunt for the stories to tell the memoires of the Mad King.

Act 1 welcomes you with a scavenger hunt where adventurers collect stories across Tyria to compile the Mad Memoires. Act 1 was released at the start of Halloween.

Act 2 tasks players with locating the second volume of the memoires. Lunatic Courtiers appear in Queensdale, Kessex Hills, and Gendarran Fields and players participate in Halloween-themed meta events. Players may also enter Haunted Doors with pumpkin icons above the door to enter the Mad King's Realm, including access to the Mad King's Clock Tower. Act 2 was released on October 26.

The Mad King is trying to break free into Tyria through a portal in the Grand Piazza in Lion's Arch! Players must enter the Ascent to Madness dungeon and defeat him. This act caused permanent alteration of the Lion's Court statue.

It's Mad King Thorn Day in Lion's Arch. Stay clear of the area if you don't want to be assaulted by insidious pranks and terrible jokes. Act 4 was released on October 31, 2012 at 9 A.M. PDT/16:00 GMT and will run until sometime after Noon PDT/19:00 GMT on November 1 [3]. During this period the event will occur about every hour.

Over 50 events were introduced in this update, involving two specific enemies[4][5]: