Phase 1 of The Lost Shores started on 16 November 2012. Players will face the karka threat, a new dungeon, and a large scavenger hunt to find a way to defeat the karka.

To complete Phase 1, players must have completed the dynamic event chain leading to Noll before Phase 2 began (November 17, 12:00 PST); they can continue to pursue the investigation now. Some NPCs will appear in two places at once.[1]

The Invasion of Lion's Arch meta event took place at the beginning of phase 1. Players fought waves of Karka near Lion's Gate and provided samples to Bardus. After the event finished, Inspector Ellen Kiel in the Grand Piazza in Lion's Arch charged players with investigating the reason for the attack. Karka start attacking Consortium locations in Caledon Forest and Kessex Hills.

To help with the reconstruction of Lion's Arch, players are invited to donate building materials. This is done by combining Donation Packaging bought from Miyani with any three items of the same type in the Mystic Forge to obtain Captain's Council Commendations. These can be traded with Lionguard Lyns in the Grand Piazza. Donations stop after The Lost Shores event is over.

The Consortium invites you and a party to adventure into the unknown nether realm of the Fractals of the Mists. This is a new type of dungeon that features multiple mini dungeons called fractals and an ever increasing difficulty.

Inspector Ellen Kiel in the Grand Piazza asks you to investigate the possible reason for why Lion's Arch has been invaded by karka. Your search will take you to Consortium bases in Lion's arch, Caledon Forest, and Kessex Hills. There will also be Lost Shores events that coincide with these areas.

Talk to Miyani about the mystery of the karka. Talk to Lionguard Lyns (Commendation trader) and go through her dialogue options if Miyani does not bring up speaking with Zommoros. Zommoros will tell you that the karka are a dangerous threat. You will receive a mail from Miyani, who tells you that various races are affected by the invasion and asks you to check up with a Hylek, a Quaggan, and a Largos. You may need to log out and back in, or change zones, before you receive the mail. 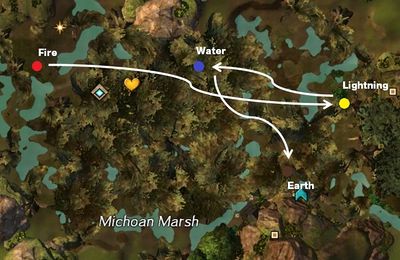 Primary article: Drive the invading karka out of Morgan's Spiral

Primary article: Drive the karka out of Garenhoff's harbor