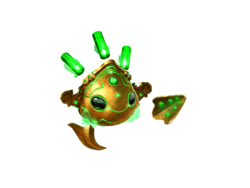 Unlock the Canthan Jade Tech Mastery track to equip and level up your very own jade bot. This helpful (and adorable) friend can help you find hidden treasures, power up new weapons, enhance your travel, and more!

Jade Bots are unique companions available exclusively through the Guild Wars 2: End of Dragons expansion. Once unlocked, they can be used for a variety of activities, such as to light up lanterns, open chests or earn buffs. Many of their functions are only available in Cantha maps, with the main exceptions being the attribute bonus and modules.

You've encountered jade technology that requires a jade bot to make use of it. Unlock the Jade Bot Mastery line to obtain a jade bot! You can do this as you progress through the End of Dragons story.

During the story instance The Future in Jade

During the story chapter Weight of the World

Out of range!
Return to the flight area or you will be disconnected.

Customize your jade bot at a workbench.

The jade bot can be customized at any Jade Bot Workbench in Cantha with a multitude of modules. Some can be purchased from Xunlai Jade Sales Associates and others can be crafted by

jewelers. A jade bot has three Slots in its hero panel section:

Jade bots are small jade mechs created from dragonjade by Xunlai Jade. They provide day-to-day aid for Canthans who can afford them, as the dragonjade technology is very expensive. They are also used as help with transportation through Cantha via Zip Lines and can be deployed for security purposes or scanning mined jade.

Jade Bot skins can be unlocked account-wide by purchasing them in the Gem Store. The skins have only cosmetic effects; there are no gameplay advantages associated with them.