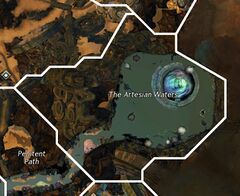 Map of The Artesian Waters

The Artesian Waters, also known as the Source of Orr, is a spring system that feeds every river in the Ruins of Orr. It has been blocked off by all routes, except an underground cave accessed by the stream beneath the Cathedral of Verdance. The springs themselves lie beyond an enclosed door.

The Artesian Waters holds magic which was powerful enough to draw the Six Human Gods to Tyria from the Mists. According to human scriptures, Dwayna was the first god to appear at the site of the spring system sometime before 786 BE, and it became a venerated place since.[1][2][3] Orrians continued tending to the site after the Exodus of the Gods until Orr sunk in the Cataclysm in 1071 AE.

Zhaitan's awakening caused the Rising of Orr from the depths of the Sea of Sorrows in 1219 AE, and the Artesian Waters became corrupted like the rest of the peninsula under the Elder Dragon's influence. The changed waters fed Zhaitan's corruption, spreading it across the nation and overpowering all attempts to subvert the corruption.

After fighting through hordes of Risen in 1325 AE, the Pact Commander and Trahearne confronted and defeated the Sovereign Eye of Zhaitan which Zhaitan had tasked to guard the Artesian Waters. In a powerful ritual using the sword Caladbolg as a focus, Trahearne was able to begin cleansing Orr of Zhaitan's corruption, and ultimately completed his Wyld Hunt. Although the cleansing was slow, the immediate area began to show new life with trees growing amidst the seaweed and coral that had grown during Orr's sinking. Given the changes caused by the cleansing, many Tyrians came to believe that Orr would become a verdant land again.

At some point, the spectral weapon Sharur was recovered along with other corrupted weapons guarding the Artesian Waters from Pact forces. Despite the cleansing of the waters, Sharur remained corrupted though the corruption was only benign and aimless.[4]

In 1330 AE, after Caladbolg had been shattered in the fight against Mordremoth, the mended but incomplete remains of the sword were brought to the Artesian Waters by the Pact Commander and Ridhais in an attempt to fully heal it, drawn by the ritual once used with Caladbolg. Entering the Dream of Dreams through Caladbolg, the Commander fought a version of themselves wielding the blade and was confronted with their struggle and doubts to prove themselves worthy of wielding the weapon.

A Vigil Warmaster stationed in Orr explained that Orr was still a "waterlogged wreck" and Risen remained a threat. However, recovery was nevertheless progressing in nearby Orrian areas such as Siren's Landing as oakhearts appeared in the region and helped spread verdance with Tyrian volunteers while the remaining Risen were slowly being culled.