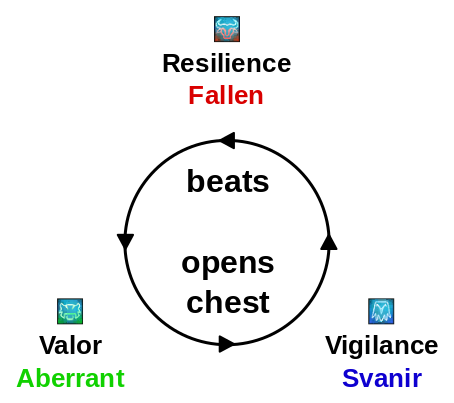 Strength over the other essences.

Essence manipulation is a mastery mechanic used in The Icebrood Saga. A tutorial in using this mechanic can be found by speaking with Researcher Yarixx in Jora's Keep.

Various enemies and objects in the Far Shiverpeaks are infused with one of three colored essences which relate to one another rock-paper-scissors style. By progressing the mastery tracks related to essence manipulation, the player can make themselves more powerful against these enemies and gain the ability to open essence chests.

You will not become less powerful against enemies by progressing masteries or collecting essences that enemy is strong against.

Specific circumstances allow you to channel the power of an essence against its weakness to unleash a powerfull offensive attack. Try it now!

Essence orbs are released by foes as damage is dealt to them. Orbs can be collected by walking over them, granting an effect that stacks up to 30 times. At 30 stacks the effect changes into the power version. While you have a power effect you gain access to the corresponding special action skill that can be used on veteran enemies at 75% health and champions at 75%, 50%, and 25% (when they expose their breakbar.)[1]

Essence chests can be identified by their colored aura, and may be opened once per day. Small essence chests may be opened after the player has trained the first tier of the essence manipulation mastery that is strong against that chest's essence type. Medium and large chests require the second tier of the mastery to be trained. They do not require you to have any essence charges to be opened.