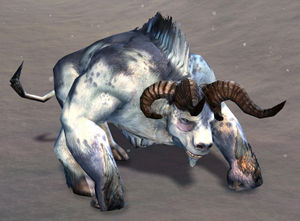 Minotaurs are one of the oldest species in Tyria and are very much prized by the norn for their warm, furry coats. They were once extremely populous throughout the Shiverpeak Mountains but now reside solely in the northern regions. They can now also be encountered in Ascalon and Kryta.

An old folk legend states the only reason dolyaks were domesticated instead of minotaurs is because minotaurs would rather be beaten to death than obey a command. Dolyaks, simply put, were less stubborn.