Spirits of the Wild (object)

This article is about a book. For the spirit guides, see Spirits of the Wild. 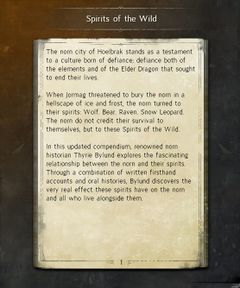 The Spirits of the Wild is a book found in the Astralarium in the Domain of Istan. After it has been returned to its corresponding bookshelf in the library, its contents can be read by interacting with it.

The norn city of Hoelbrak stands as a testament to a culture born of defiance; defiance both of the elements and of the Elder Dragon that sought to end their lives.

When Jormag threatened to bury the norn in a hellscape of ice and frost, the norn turned to their spirits: Wolf. Bear. Raven. Snow Leopard. The norn do not credit their survival to themselves, but to these Spirits of the Wild.

In this updated compendium, renowned norn historian Thyrie Bylund explores the fascinating relationship between the norn and their spirits. Through a combination of written firsthand accounts and oral histories, Bylund discovers the very real effect these spirits have on the norn and all who live alongside them.