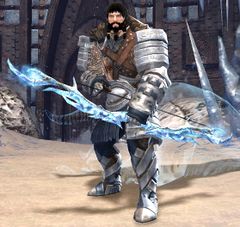 My thanks for delivering the Minotaur spirit! My dragon beast needs a full meal before I turn it loose on Hoelbrak.

Vidkun is a fanatical Son of Svanir who has been feeding minotaurs to the Dragon Beast in hopes of drawing out the Minotaur Spirit to feed it to Jormag.

In 1325 AE, Vidkun put a plan in motion to capture live minotaurs that would be fed to a powerful Icebrood dragon champion known as the Dragon Beast. After feeding enough minotaurs to the beast, he decided to have his minions track down and capture Minotaur, a lesser Spirit of the Wild, to feed it to the Dragon Beast as well to empower Jormag, after which the dragon champion would be powerful enough to be unleashed on Hoelbrak and slaughter the weak in Jormag's name.[3]

The Slayer of Issormir began investigating the unusually aggressive behavior of minotaurs after the Great Hunt of 1325 and came across Vidkun's minion Hafdan the Black who boasted about the Sons' plans for the Minotaur spirit. Alerted to Vidkun's ambitions, the Slayer sought the help of famed norn heroine Eir Stegalkin and saved both the Spirit of the Wild and the minotaurs from the Sons while Vidkun was busy looking after the Dragon Beast.[1]

The norn pair, along with Minotaur, eventually tracked down Vidkun and his hunting party to Hunter's Lake where they drew him and the dragon champion out after slaying the rest of the party. Ever boastful, Vidkun belittled the pair's efforts and mockingly thanked them for bringing Minotaur to the Dragon Beast, threatening to unleash the beast on Hoelbrak after the pair had been disposed of. Due to his bond with the Dragon Beast, Vidkun kept reviving each time he was struck down, which forced the norn heroes and Minotaur to change their tactics and strike down the dragon champion first. Vidkun fell for the last time after the Dragon Beast had been defeated, ending the threat to the minotaurs who returned to their old ways.