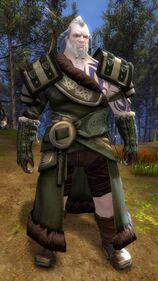 Finest tracker I've ever seen, and his survival skills are legendary.

Ferghen the Tracker is an aging norn hunter and tracker who also acts as a merchant from time to time.

Ferghen grew up to become one of the best trackers among the norn and befriended a young Eir Stegalkin in the past. As he got older, he got lost in the forest and let his dolyaks wander off, which earned him some ridicule from his peers who were aware that he also liked to make up stories.

In 1325 , Ferghen noticed that the minotaurs in Wayfarer Foothills were acting strangely, and saw the Minotaur Spirit in corporeal form up in a tree. He asked for the help of Eir and the Slayer of Issormir to protect his caravan on its way to the Heart of the Wolf from the minotaurs before asking them to track down the Spirit itself.

He later joined the Pact as one of their expert hunters and trackers in the war against the Elder Dragon Zhaitan. On a mission scouting for a Searing Cauldron found in Orr, Ferghen fell victim to the Risen, becoming one himself. As a Risen, he hunted down and killed his entire team one by one, leaving Kekt the last to be killed. Ferghen was eventually taken down by the Pact Commander, but unlike other Risen he was able to come back after being killed once and had to be put down a second time.

Upon engaging as a risen
Time to teach you a lesson.
Upon defeat as a risen
No, my story can't end like this.