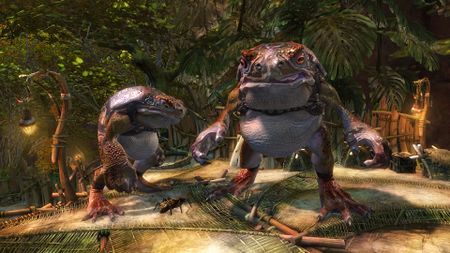 Nuhoch bullfrog hylek could not be more distinct from their Itzel cousins. Huge, heavy, and powerfully built, Nuhoch make up for their lack of speed and agility with prodigious strength and unparalleled stamina.

The Nuhoch are one of the hylek tribes found in the Heart of Maguuma.[1] Players can learn their language and how to travel through their wallows through the mastery system. They are a relatively recent addition to the jungle, but have made allies with the local Itzel tribe and learned how to craft alchemical concoctions to combat the local chak. They occasionally clash with the hostile Xocotl tribe.

The Nuhoch worship a nature goddess named Ameyalli,[2] but by 1328 AE the imperialistic Zintl tribe have been attempting to convert them to the worship of the sun god of the same name with limited success. The Nuhoch in Tangled Depths reside in the village of Teku Nuhoch and are led by a female chieftain called Kaana Pahua.