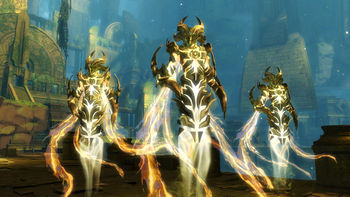 The Exalted are true believers in Glint's message of hope and peace, wholly dedicated to preserving Glint's legacy...

The Exalted are a sect of former humans living in Tarir, the Forgotten City, located deep within the Heart of Maguuma on top of a ley line hub. Originally humans of flesh and blood, they were recruited by the Forgotten to safeguard Glint's egg after it left stasis. To fulfill this task, they were changed into beings of energy using Bloodstone magic and rituals and their energy encased in magical armor.[1]

The Exalted divide their tasks into three groups called affinities. The affinities are Bastion, Burnisher, and Sage. The Exalted all have the same three appearances, which are determined by their title and task. They also have Enchanted Armors, gigantic versions of the armor that the Exalted's energy is encased in, which can be used by others or function autonomously. They are designed to remain within their cities and do not take leaving lightly.[2]

They are led by an individual called the Luminate who was granted authority over the other Exalted by the last Forgotten.[3]

The Exalted cannot be killed by normal means, and their energy cannot be corrupted by dragon energy. However, they will die a "final death" should their masks be torn off, or they sacrifice themselves in an explosion of energy. To fight the Exalted, the Elder Dragon Mordremoth created the Mordrem Vinetooths to remove their masks in battle. Should an Exalted die, their mask is to be placed in the Masks of the Fallen memorial, where only those most trusted by the Exalted are allowed to enter.[4]

While the Exalted are immune to dragon corruption, they can be altered via Forgotten magic to become hostile and turn red in color although the effect seems to leave them mindless as a result. The former god Balthazar and the lich Palawa Joko were successful in altering the Exalted of Kesho as their test subjects with this method to create the first Forged.[5]

See also: A Study in Gold

The Exalted were originally humans that came from the same people who became known as the Zephyrites. They were recruited approximately 200 years ago by the Forgotten, when the latter were near extinction and had lost the Brotherhood of the Dragon to the Transformation of the Dwarves, in order to carry on Glint's legacy. After undergoing a series of trials to ensure they were worthy, the Exalted underwent a ritual that utilized Bloodstone magic in order to become nigh immortal, with at least one of these rituals having taken place in Gilded Hollow.

While some Exalted built the city of Kesho in the Elon Riverlands to study there with the Forgotten and Glint as well as nurture Glint's first scion Vlast, most Exalted continued the Forgotten's work in Auric Basin by establishing and preparing Tarir, the Forgotten City so it would eventually receive Glint's second scion. During this time, the Exalted of Auric Basin allied themselves with the asura of Rata Novus, which was established by individuals like Zinn to study and combat the Elder Dragons. When the Exalted were satisfied with the establishment of Tarir and its outposts, they listened to the speech by the last Forgotten of Auric Basin and recorded the speech to tablets in Tarir for later study. Following the departure of the Forgotten, the Exalted went into hibernation in wait of Glint's legacy to require them.

During this century-long sleep, the Exalted's allies of Rata Novus were overrun by the chak in 1173 AE,[6] and the Elder Dragon Mordremoth was woken by Scarlet Briar in 1327 AE. The Exalted became active shortly after Mordremoth's awakening when Glint's egg became active and the Master of Peace was in the process of taking it to the city. The Exalted realized that the Heart of Maguuma was facing the threat of Mordremoth's Mordrem minions expanding their territory, and set to work to protect Tarir from Mordrem scouts and reactivate the power of the outposts surrounding Tarir to strengthen the defenses around Auric Basin.[7]

In 1333 AE, several months after the awakening of Jormag, the Elder Dragon of Ice, another Elder Dragon, Primordus, began to stir. His forces, Destroyers, started attacking settlements around Tyria, and the Exalted were one of the groups to come to aid the the allied forces of the Pact Commander.