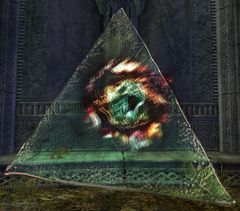 It was a tool of the mursaat and White Mantle, associated with the people of Janthir. It was a magical construct that could see a person's gifts.

The Eye of Janthir is an ancient artifact of great power, used by the White Mantle and the mursaat. It originates from the Isles of Janthir, being tied to the people who once lived there. During the White Mantle's reign, it was used to discern who were Chosen, so that they may be sacrificed atop the Maguuma Bloodstone. The Eye disappeared with the White Mantle's fall from power in 1072 AE, and various theories rose to speculate on its fate since.

The Eye of Janthir was an ancient artifact of great power originating from the Isles of Janthir and was tied to the enigmatic people who had once lived there. It had an intelligence of its own and was selective of who it would follow. According to the White Mantle cult who worshipped the mursaat as the Unseen Ones, the cult's founder Saul D'Alessio had traveled to the Isles of Janthir and returned to Kryta with the Eye to identify magically gifted Chosen among the Krytan population each season.[1] What few knew was that the cult would not take these Chosen to study at the Temple of the Unseen; instead, the Chosen would be sacrificed atop the Maguuma Bloodstone in secret so the White Mantle and the mursaat could use their souls to power up the batteries keeping the Door of Komalie shut and prevent the titans from breaching into Tyria in large numbers.

In 1072 AE, Justiciar Hablion ordered a group of adventurers—including Aidan, Cynn, Devona, Mhenlo and the future Hero of Tyria—to cleanse themselves in the Fountain of Truth before having them escort the Eye to the village of Loamhurst and identify the newest batch of Chosen. When the escort was ambushed by Caromi tengu, the Eye assisted the adventurers by sending out a shockwave which knocked the entire flock of tengu to the ground.[2][3] The Chosen caravan was later intercepted en route to Maguuma Jungle by the Shining Blade rebels who were attempting to stop the White Mantle's sacrifice rituals.[4] With the White Mantle's fall from power in the same year, the Eye vanished.

Many theories began circulating about the Eye of Janthir's fate long after its disappearance. Some hypothesized that it had been lost during a skirmish between White Mantle and Shining Blade forces while others thought that it had retreated to the Isle of Janthir, or wherever the mursaat had come from. Drawings of the Eye were recorded in the Durmand Priory along with scholarly theories about its origins and fate.[5]

In 1330 AE, a group of raiders accompanying Scholar Glenna found the Eye of Janthir within the Bastion of the Penitent in Woodland Cascades where it was first witnessed above Cairn the Indomitable's station. After investigating the area and following the Eye's trail through multiple obstacles, the raiders discovered that the bastion was a mursaat correctional facility for their political prisoners and that the Eye had been keeping the long lost White Mantle founder Saul D'Alessio—along with other inmates who had later been slain by the bestial warden Samarog in an unsuccessful prison riot—alive for the past 260 years under the orders of the mursaat. Once Saul had been rescued from the demon Deimos, the Eye retreated from the ancient mursaat prison and caused Saul's body to deteriorate without the aid of its life-sustaining powers. With his dying words, Saul revealed his life story and that the Eye had tormented him with guilt and shame in an effort to break his will and convince him to serve the Unseen Ones once more.

The Shining Blade eventually learned that the Eye had appeared in Bloodstone Fen and had begun seeking out its mursaat masters. To fulfill its latest task, the Eye searched for Lazarus's aspects as he was the last mursaat alive in Tyria. Its search led it to one of the remaining aspects held in the White Mantle Hideout in a cave north of Brisban Wildlands where Exemplar Kerida and the Pact Commander followed it to. Upon witnessing the death of Justiciar Araya who had tried to stop the pair's advance, the Eye retreated and began seeking out another aspect of Lazarus.

The Commander and Kerida continued tracking down the Eye separately in various locations until they learned that it had traveled to Siren's Landing in Orr where it had been spotted entering a sealed reliquary dedicated to the fallen god Abaddon.[6][7] Upon reuniting, the pair continued chasing the Eye and fought the guardians it had summoned. During this battle the Eye recognized the True Sight dormant in Kerida and the Commander and chose to spare them before it retreated deeper into the reliquary where the last aspect, which the former god Balthazar had hidden during his visit to Orr, was revealed.

Kerida and the Commander used the Shining Blade and the aspects Kerida had brought with her along with the last aspect to revive Lazarus so they could kill the last mursaat for good. When the resurrected Lazarus identified Kerida as the necromancer Livia and tried to turn invisible and escape to recover from the wound inflicted by the Shining Blade, the pair used the resisting Eye of Janthir to reveal the cloaked mursaat and forced him to fight them. Lazarus was slain after a fierce struggle, and the Commander used the opportunity to ask the Eye about Balthazar's whereabouts. The Eye revealed a vision of Balthazar taking an army to the Crystal Desert to fight the Elder Dragon Kralkatorrik before it disintegrated, proving once and for all that no mursaat remained on Tyria.