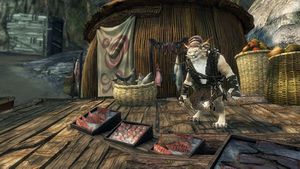 The Olmakhan are a tribe of charr named after Olma, the first sandshifter. They fled from the Flame Legion before the eventual Charr rebellion. They now live in the village of Atholma in Sandswept Isles.

The Olmakhan tribe started out as a warband. Instead of joining the rebellion of Kalla Scorchrazor, they fled the charr homelands. They feared that the insurgency of Kalla was doomed, like other minor insurgencies before, and saw it as a continuation of a long cycle of violence and fighting between the Charr[1]. Throwing off the caste system and the taboo on magic, they were able to make their escape from Ascalon. The trek led them along the Shiverpeak Mountains south towards the Crystal Desert, where they founded the village of Atholma by the coastline in 1121 AE. During the five year exodus their warband slowly changed into a tribe, led by a council of five elders. One of the charr who first established the tribe is said to be Olma, and she is also the namesake of the tribe. 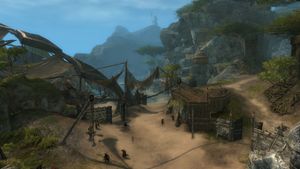 In 1219 AE the awakening of the Elder Dragon Zhaitan caused a cataclysm, later dubbed as the Great Flood by the Olmakhan. Their homeland was transformed into an archipelago and many members of the tribe died. However, the Olmakhan managed to rebuild and thrive again.[2]

The Inquest proved to be a major challenge to the Olmakhan after they founded a complex in the Sandswept Isles called Rata Primus. Around this time, Kall arrived in the Desert Highlands to investigate an Inquest base. In order to research the Scarab Plague, the Inquest kidnapped members of the Olmakhan tribe and used them as live test subjects. One of such captives was Boticca, a stormcaller who managed to escape from the Inquest with the help of the Pact Commander. Grateful for the help, Boticca brought the Commander and their friends, norn Braham Eirsson and gladium charr Rox to speak with the tribe's elders. Shortly after, the Inquest sent a raiding squad of golems to the village to capture more test subjects and kill any who refused. Elder Narn died protecting his fellow elders and Boticca from Mark II Beta Exterminator Golem much to everyone's shock. After the golem raiding squad had been destroyed, the Olmakhan gathered to honor Narn's passing while the elders decided to pledge the tribe to Boticca and the Commander's cause.[3] With the help of the the Pact Commander's Dragon's Watch guild, the Olmakhan launched a counterattack on the Inquest complex.

After Palawa Joko's attack on the city of Amnoon, the Olmakhan traveled to the Desert Highlands where Taimi alongside Gorrik and Blish had created a rift leading to the Domain of Kourna. They traveled through with other allies of the Pact Commander through this rift and began helping in the fight against Palawa Joko. Certain Olmakhan declared they joined the fight because they believed was their world as well.[4] Some of the Olmakhan who died in Kourna were Awakened.[5]

In the early parts of the war against Kralkatorrik, Olmakhan forces participated in the battles in Thunderhead Peaks, led by Bottica and Rox. They headed south to the Ice Floe to request oil from the dredge living there and aided them in rebuilding their oil-collection system. An colossal oil elemental appeared from a rift and battle commenced, resulting in the Olmakhan and the Pact's forces obtaining the oil they needed.

During the events following Kralkatorrik being trapped under the island of Dragonfall, the Olmakhan played a crucial role in the attack upon the Elder Crystal Dragon. Under the lead of Boticca and Rox, the Olmakhan established a camp in the Underworld. At the Olmakhan Camp, lifebinders discovered that the Soul Binders scattered around the area are filled with magic and can help in the fight against the Branded. Olmakhan Builders helped construct Brandstorm Disruptors. 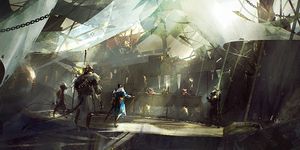 The Olmakhan's separation from the High Legions and dislike of violence has diverted their culture from other charr. Since they're not a warfaring tribe, there have no warbands or gladiums. All of the Olmakhan have a role in their society and are given a sense of belonging. The core dictum of their lifestyle is peace with nature. They live maintaining balance with nature, and survive by fishing and farming. The Atholma fishers utilise harpoons and occasionally get help from Kaarg the Gentle, a giant who lives near the village. The Olmakhan also hunt, mainly at a part of the isles called The Hunting Grounds. They perceive hunting as balancing nature by culling invasive species and overpopulated predators.

The Olmakhan do not use the fahrar system of raising cubs. Instead they form families that take care of their children, who are taught how to hunt, fish, and play[6], including games such as "Sand Monsters and Heroes". The cubs are also taught how to use magic and some can already summon sand elementals. They are also seen performing duties such as tending marmoxes.

The Olmakhan are a secluded tribe, not used to having outsider visitors, and it is rare for the Council to give audiences to strangers[7]. When Ewyn and his friends travelled outside Sandswept Isles, they made sure not to tell people where their home was located, as the Olmakhan desired to be alone with nature.

While the Olmakhan appear to know of metallurgy, they use it mostly for making fishing and farming equipment, construction and defense, not for warfare. Some time after the Great Flood an airship fell from the sky on Atholma. The Olmakhan refashioned it as a meeting hall for the Council of Five.

Many Olmakhan appear to be adept at the use of magic, and seem to favor healing and elemental magic. They can create powerful sand elementals and protective shields for defense. It is said that the first member of the tribe to become a sandshifter and teach the others was Olma.

The Olmakhan seem to be open to same-gender relationships. When a charr Pact Commander visits Atholma, both female and male Olmakhan are heard admiring them, regardless of the Commander's gender. A couple of two female Olmakhan, Cadell and Nerys, visit the Festival of the Four Winds and speak of planning to start a family.

Training skimmers is an important part of the Olmakhan culture and the tribe is seen as experts on the topics. For example, the skimmer rancher Sibaha who was researching the abilities of skimmers sought the expertise of Olmakhan Kall and asked him for tips on training, handling and breeding.

The Olmakhan are ruled by the Council of Five, which consist of five elder members of the tribe, who are elected. They are responsible for governance, lawmaking, and protecting the tribe from various threats. For example, when the djinn Zohaqan caused storms which threatened all life on Sandswept Isles, Elders Rhona and Yowen led a scouting party to his cove in order to stop him.

The Lorekeepers are important members of the tribe, guarding history, legends and songs of their people. They also support their fellow tribe members in mourning. The current Lorekeeper is Rhosan, with an apprentice named Aeron. Rhosan is seen training a scribe, instructing them to copy all the scrolls written by the Olmakhan in the past years, making sure their history doesn't get lost.

The lifebinders, currently trained by Elder Gawr, are taught to dedicate their lives in the tribe's service. They learn healing magic, which they believe to be a power borrowed from nature[9].

The Olmakhan tribe values magic and even cubs are taught how to use it. Members of the tribe who utilise sand magic are called sandshifters. They can summon powerful sand effigies. The first sand shifter is said to be Olma. Those who specialise in summoning thunderstorms are the stormcallers. One of their members is Boticca. The Olmakhan Windcallers utilise wind-based spells.

Warriors and hunters of the tribe who are taught to use swords are earthstalkers. They perform various duties such as guarding the entrances to Atholma and hunting. Those who wield bows are called nightwalkers.

Although the Olmakhan do not have a deific religion, they hold nature in high regard and treat it as sacred. "Nature favour you" is a common Olmakhan greeting. When something good happens, the Olmakhan praise nature[10].

The Olmakhan believe that death is a part of nature's cycle and grief is an important part of the living. The Olmakhan bury their dead and mourn them in a cavern called Skycavern Burial Grounds. The hermit Ewyn has also built memorial mounds for his fallen friends near his home. Deceased Olmakhan are believed to be with their ancestors. According to Braham, the Olmakhan have a saying that a deceased person's memory is a star to guide them[11]. The saying is also a title of the fourth episode of Season 4 of the Living World, A Star to Guide Us.

Art seems to be play an important part in the daily life of the Olmakhan, as well as their beliefs. Music is a part of the mourning process: in order to help them grieve, Lorekeepers Rhosan and Aeron teach their tribe members traditional songs such as "The Good We Do In Life" and "We Carry Her Loss Together". The villagers also conduct ritual dances in the Ritual Grounds, lighting up bonfires on the island.