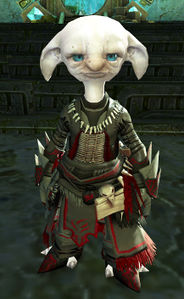 My wrath is as fierce as my intellect.

Councillor Phlunt is an old asura, member of the Arcane Council and dean of the College of Synergetics. Like many other asura, he is arrogant beyond his worth, seeing himself and his research above all others; although he has recently begun to see potential in Taimi. Phlunt acts as the Arcane Council's ambassador to other races, attending political events such as the party Minister Caudecus set up to celebrate the Ebonhawke Treaty.

A dean of the College of Synergetics, Phlunt became a member of the Arcane Council. In the past, the college student Blish tampered with Phlunt's thaumaturgic de-dolyakinator.[1]

In 1325 AE, Phlunt and the rest of the council attended the Snaff Prize competition as judges and rated the inventions of rival krewes of Teyo and the Savant among other entries. Despite facing some obstacles along the way, the invention of the Savant's krewe—the Interspatial Translocator, M.I.G., or VOED—ultimately impressed the judges enough to win the Snaff Prize. He and the other councillors later attended a meeting with the purpose of making Varkk the latest councillor. However, due to the Savant and Zojja's interference which exposed Varkk's crimes with the Inquest, Varkk lost his would-be seat in the council before he could claim it.

Later that year, Councillor Haia attempted to assassinate her fellow councillors with the altered VAL-A Golem. The Savant and Zojja managed to prevent the attempt on the council's lives just in time and exposed Haia's schemes. However, as Haia had not left any evidence behind so that the golem tampering could be traced back to her, the council elected to keep an eye on her in the meantime. The Savant and Zojja also prevented another attempt on the council's lives by the Inquest member Kudu who had intended to flood the council chambers and Rata Sum with the Transatmospheric Converter.

As the Ebonhawke Treaty negotiations had reached a favorable turning point for the charr and humans, Minister Caudecus Beetlestone invited ambassadors of the five major races to his manor for a party celebrating the occasion, which also included Queen Jennah, Captain Logan Thackeray, and Zojja. Phlunt traveled to the mansion as the Arcane Council's representative and was impressed by the design of the sausages that were being served there although he was disappointed that no one wanted to talk to him about his Interstitial Spellholder. He had small talk with the other guests, including the future Pact Commander.

During the party, the artist Uzolan suddenly went rogue and sent a golem to attack the guests while helping the Separatists kidnap Queen Jennah and ambassadors Mia Kindleshot and Sigfast in the ensuing chaos. Phlunt managed to survive the encounter unscathed and eventually learned that the Commander, Logan and Zojja had defeated the Separatists and freed Queen Jennah.

When the Pact Commander began to call forth a summit of Tyrian leaders to discuss the issue of the Elder Dragon Mordremoth's rising, Phlunt accompanied Taimi to Omadd's Machine in Dry Top in 1327 AE. He initially refused to attend the summit as the Arcane Council's representative unless something was done about the Mordrem vines assaulting waypoints across the continent. When Taimi had built a device to solve the issue, Phlunt used his rank and ties to Taimi's college, the College of Synergetics, to obtain proprietary ownership of her device. Despite initial hostilities from this move, Taimi and the Pact Commander handed the device over, and Phlunt attended the summit begrudgingly.

At the summit, though Phlunt was quick to voice complaints, he was also quick to voice the threat that Mordremoth posed. When the Shadow of the Dragon assaulted the Grove, injured the Pale Tree and threatened the lives of everyone present before being driven off, Phlunt was convinced to help rally the asura to aid the Pact in the planned assault on the destructive Elder Dragon. He ordered one of the Peacemakers to spy on Zojja while the Pact set up a forward base at Camp Resolve. However, the Peacemaker had no intention of following Phlunt's orders, and the councillor would be unaware of the deception due to not accompanying the Pact on their mission to the Heart of Maguuma.[2]

When Rata Novus was discovered in Tangled Depths during the campaign against Mordremoth and news of its existence spread following the Elder Dragon's demise, Phlunt once again used his rank as Taimi's superior in the College of Synergetics to usurp command of researching the lost city. Despite Phlunt's continuous probing of her actions, Taimi had managed to keep the most crucial of information—the Novan's research on the Elder Dragons—a secret so she could analyze it in peace.

However, when Taimi discovered that the Elder Dragon Primordus had moved to the Ring of Fire in 1329 AE, she purposefully informed Phlunt about it to shift his focus from her to other matters. Phlunt, in turn, sent a krewe to Ember Bay to gather research, though most of this krewe had stronger loyalties to Taimi despite the difference in rank.[3]

When the mursaat Lazarus approached Rata Novus in 1330 AE and was revealed as Balthazar, the God of Fire and War, Taimi reluctantly revealed a secret entrance into her concealed Elder Dragon research lab so the Arcane Council and other asuran researchers could flee from Balthazar's mercenary forces. Instead of fleeing, however, Phlunt chose to "lead" (from the rear) the charge of the Rata Novus research krewes against the mercenaries to protect the Rata Novan research. After defeating the mercenaries in the aftermath of Balthazar's departure, Phlunt focused on the discovered lab on Elder Dragon research. He promptly began studying the secret room, admitting that Taimi had pulled many tricks on him and that he could blind himself to certain things.

Following Balthazar's demise in the Battle of Kodash Bazaar, Taimi had left the Dragon Lab which Phlunt had taken over. While in the lab, Phlunt suddenly witnessed one of the lab's communication devices activating despite being told that Taimi had deactivated all of them prior to her departure. The councillor communicated with someone who introduced herself as a centurion of the Iron Legion. Upon learning that Taimi had seemingly made a profitable deal with the centurion about supplying the legion with golems, Phlunt was eager to receive payment from Taimi's work. However, the centurion pointed out that she hated plagiarists and that she would be sending the golems to assault the lab instead. Phlunt was horrified by the Iron Legion's planned siege, unaware that he had been subjected to a prank call by Taimi.[4]

Following the Elder Dragon Jormag's awakening in 1333 AE, the Ice Dragon's champion Ryland Steelcatcher approached the Arcane Council with an offer to exchange knowledge and collaborate with the asura to defeat Primordus, Jormag's enemy, for good as the Fire Dragon's rise was inevitable. Soon after, Rata Sum was invaded by destroyers which proved to be stronger than previous destroyer generations. Phlunt fought alongside the rest of the Arcane Council, Ryland's Frost Legion, Taimi, Rytlock Brimstone, Braham Eirsson and the Pact Commander and forced the destroyers into retreat once they had felled the destroyer lieutenant leading the invasion force.

After the attack, Phlunt elected to travel to the Eye of the North as the Arcane Council's representative so the asura could pool their resources together with the other races in the wake of increased destroyer activity throughout Central Tyria. While discussing the threat of the Elder Dragons with the Commander, Phlunt dismissed the Commander's concern about whether Jormag could be trusted by pointing out that a truce with Jormag was beneficial. With the Ice Dragon as their ally, the asura could finally get rid of Primordus who had driven them from their ancestral home centuries ago. When the Commander pointed out that the new generation of destroyers did not seem to be infused with Zhaitan or Mordremoth's magic unlike the destroyers encountered in the Ring of Fire, Phlunt suggested that Primordus's forced slumber might have allowed it time to process the other Elder Dragons' magic or it had altered itself to accommodate the magic.

Why do you youngsters never watch where you're going?

Are you a Councilor?

Where did you imagine you were, some auction house?

Yeah. Got any deals?

Shut your yap. I don't need to take your sass. Leave me be!

Ah, clever: a self-deferential device to coerce me into further conversation. Well, I won't fall for it!

Certainly not. This is the Arcane Council chamber, and you must be Councilor Phlunt.

A pity you showed your hand so early by feigning ignorance as to my title and name. I won't have another word with you.

Sorry to bother you, sir.

I have elected to serve as a delegate for our...collaboration, in the matter of Primordus. Our research gets us ever so closer to its demise.

Your research may end up giving Jormag an advantage.

Your critique is both obvious and unnecessary. Primordus has been the bane of my people for generations; its defeat will be an important milestone in our history.

Jormag is just as dangerous. Both Elder Dragons must be dealt with.

These destroyers seem to be free of Zhaitan's or Mordremoth's magic.

An astute observation. Primordus' slumber may have allowed it time to process the foreign magic—or alter itself to accommodate it. We don't really know at this point.

Greets
My ears! It's good to see you.
What do you require?
I've forgotten more than you'll ever know.
The Eternal Alchemy contains every answer.
Excelsior.