This article is about the artifacts. For the book, see Bloodstones (book).
Spoiler alert: The following text contains spoilers relating to The Ruined City of Arah (explorable) and Living World Season 3.

The Bloodstone was a powerful and large stone that the Seers created to contain magic that was not corrupted by the Elder Dragons during their previous rise.[1] The original Bloodstone was later broken into five pieces which have since been scattered around Tyria.[2] 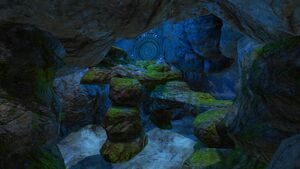 A locked door in Bramble Pass presumably leading into the Bloodstone Caves.

During the last dragonrise on Tyria 10,000 years ago, the ancient race of Seers began experimenting with artifacts with which to hide magic from the Elder Dragons who were consuming everything in their path. Their early experiments resulted in the Shadowstone, and they refined the concept further until they created the first Bloodstone with unknown divine resources.[3][4]

Millennia passed until the Six Human Gods arrived on Tyria and brought humanity with them to Cantha in 786 BE.[5] They eventually established the city of Arah in Orr and gathered multiple ancient magical artifacts, including the Bloodstone, which they stored within it. In 1 BE, Abaddon used the Bloodstone to gift magic to all the races of Tyria. However, because magic was abused and caused many wars and casualties, the human king, Doric, pleaded to the Six Gods to end the bloodshed. Most of the gods agreed, and the massive stone was sealed with Doric's blood, giving the stone its name.[2] However, the act of sealing the magic, as well as an escalating conflict between his Margonite followers and the Forgotten, eventually caused Abaddon to rebel and forced the other gods to defeat and imprison him and his zealous followers in the Realm of Torment.

To limit the races' ability to use magic, the gods split the original Bloodstone into five pieces in Arah. They not only sundered the Bloodstone but also increased its power by pulling energies from Zhaitan, the Elder Dragon slumbering deep beneath Orr.[1] The first four segments ruled over its respective school of magic: Preservation, Aggression, Denial, and Destruction. The fifth fragment, the keystone, was required if one were ever to make the Bloodstones one. Once separated, the Bloodstones were tossed into the largest volcano on the Ring of Fire, Abaddon's Mouth. Before the gods left in the Exodus, they entrusted Doric's bloodline with the duty of protecting the Bloodstones. Because the four schools of magic were separated, no individual was capable of fully utilizing all forms of magic.

After some time, Abaddon's Mouth erupted and sent the five stones throughout Tyria. One landed back into the caldera of the volcano, while another landed in the Maguuma Jungle, in a place now known as Bloodstone Fen. A third crashed through the Shiverpeak Mountains and resides in the Bloodstone Caves within the mountains, north of present-day Straits of Devastation.[6] The locations of the last two are still unknown.

Centuries later, when the White Mantle were in power over Kryta, the mursaat fueled the Bloodstones along with their soul batteries with souls of the Chosen in order to power the Door of Komalie and keep the titans at bay.[7] Vizier Khilbron, who turned out to be an undead lich working for Abaddon and who had been manipulating events to get rid of the mursaat and bring in titans to Tyria to further his master's schemes, was slain atop the Ring of Fire Bloodstone where the Chosen heroes used the lich's spirit to recharge the soul batteries which closed the Door of Komalie.

The Ruined City of Arah (explorable)[edit]

In 1325 AE, Randall Greyston and a group of adventurers braved the dangers of Risen-infested Arah to learn more about the Seers and the Bloodstone. They encountered several powerful Risen priest and priestesses who held on to small Bloodstone shards, and Greyston collected these shards after the adventures would slay one by one these powerful Risen. As Greyston collected more shards, they started to get warm and react, which made him believe that the shards were connected to the Six Gods. The group eventually entered the Heavencrystal Palace, where they found a large Bloodstone Shard, surrounded by Risen who did not attempt to carry it, unlike the smaller shards.

After clearing the Risen, Greyston realized that the gods had not only sundered the original Bloodstone in the area, but had also added Zhaitan's energies into it even though they did not know of the sleeping dragon's presence, and this increased the sundered pieces' magic. Greyston was exposed to the Bloodstone shard's power, however, and began shifting out of Tyria while the shard lashed out at his adventuring companions who ultimately destroyed the shard after a fierce struggle. In the battle's aftermath, Greyston disappeared seemingly into the Mists, claiming that he heard the voices of the Six Gods and would go to seek them out.[1] 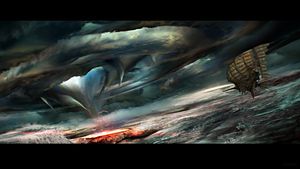 Explosion of the Maguuma Bloodstone.

The surge of magic that followed the demise of the Elder Dragon Mordremoth reached the Maguuma Bloodstone. Due to White Mantle tampering with the Bloodstone's shell, the magic shocked several ghosts free. Confused and agitated, these souls of the White Mantle's victims sought revenge on any living being nearby, and many of them merged to become a creature known as Gorseval the Multifarious.[8]

In 1329 AE, the Pact Commander discovered that the White Mantle had been experimenting on the Maguuma Bloodstone for years.[9] Due to the excess of magic from the deaths of Zhaitan and Mordremoth, and accelerated White Mantle tampering, the Bloodstone exploded. The blast itself was seemingly consumed by an entity claiming to be the last mursaat, Lazarus.

Others caught in the blast, such as unfortunate White Mantle and Pact soldiers, were either vaporized or turned into blood-crazed lunatics addicted to collecting Bloodstone shards and the magic they contained. The ghosts of those slain on the Maguuma Bloodstone returned to haunt their place of death, unable, or unwilling, to move on. The blast left behind the shattered remnants of the Maguuma Bloodstone in Bloodstone Fen.

If consumed in big enough amounts, the Bloodstone shards can cause not only nausea but lead to erratic, violent behavior and symptoms that can best be described as addiction. Further exposure to Bloodstone shards will alter their consumer and turn them into a hulking abomination in a relatively short span of time and can even unleash magic that can radically alter the environment around them.[10]