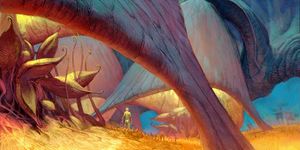 A Dreamer stands within the Dream.

The Dream is the sylvari unconscious, the wellspring from which we flow. It holds our memories, as well as our hopes and fears.

— Avatar of the Tree

The Dream of Dreams, often shortened to simply the Dream, is a mindscape[1] made up of aether and powerful magic that makes up the sylvari unconsciousness of memories, hopes, fears and more.[2] A darker side of the Dream, known as the Nightmare, exists.

Many non-sylvari believe that the Dream of Dreams is some form of hive mind, but it is not.[3] Before sylvari are awakened to Tyria, they experience visions of life within the Dream of Dreams, witnessing various memories of other sylvari and becoming acquainted with the world through these past experiences of other sylvari. The Dream is described as being like a well in these instances, with the memories and thoughts of sylvari being the water. Newborn sylvari do not awake with the knowledge of the whole well, but like that of a bowl filling with well water—each developing sylvari only takes a small measure of the information and memories. The Pale Tree herself ensures that each sylvari is then equipped with essential information, such as how to read, basic living skills, the tenets of Ventari's Tablet, and the assurance that she loves each of them.

The exact origin and nature of the Dream and the Nightmare remains unknown, but they are sometimes talked about as if they are their own entities, and both seem to actively oppose the six Elder Dragons through the Wyld Hunts and Dark Hunts they send. At least three powerful entities are tied to the Dream of Dreams and have a degree of control over it: the Pale Tree, the White Stag, and the Elder Jungle Dragon Mordremoth. Through these beings, other individuals—such as the sylvari—are able to be connected to the Dream of Dreams, allowing their minds to enter the mindscape and leaving their bodies behind temporarily.

Because the memories and information received differ among the sylvari, they are not without individualism. Upon leaving the golden fruit from which they are born, they are left to interpret what they saw in the Dream. As such, some sylvari take on the role of mentors to help newborn sylvari understand what they may have seen in the Dream. This includes lessons to explain the Tablet's writings as the sylvari interpret them, a better sense of sylvari history, and education about the world around them.[8]

The Dream can impart knowledge and sensation, but not actual experience. For example, upon being served a leg of roast moa bird, Killeen told Dougal Keane that she knows from the Dream what it is and how it will taste, despite never yet having tried it herself.[3] Sylvari also have varying degrees of an empathic sense of other sylvari through the Dream, some being so powerful they must distance themselves from others to cope with the sensations,[9] but only the Pale Tree can find true knowledge of memories of recent events in the Dream. Some sylvari, unable to cope with the overwhelming amount of sensations coming from the Dream,[10] intentionally cut themselves off through meditation and become Soundless. Soundless, however, are never completely cut off from the Dream or, in turn, from those who have a degree of control over the Dream like the Pale Tree and Mordremoth. If the Pale Tree needed to speak to a Soundless, she could, but it would need more effort than with non-Soundless.[11]

The Dream of Dreams is also capable of showing individuals the present and future as well as the past of the world, though the future it shows may not come to pass.[2] Among these visions of the future are Wyld Hunts, compulsions that drive sylvari towards a certain goal. Such compulsions are described as an itching on the back of one's neck, or a tightness in one's chest and a buzz in the back of one's head and will persist until the sylvari completes the Wyld Hunt.[12] Wyld Hunts are seen as a sign of honor among sylvari, and those who receive such are called Valiants. Many Wyld Hunts appear to focus on fighting the Elder Dragons and their minions, even Mordremoth. 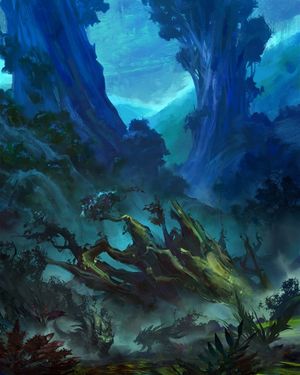 The Shadow of the Dragon lurks within the Dream.

The Nightmare is the darker side of the Dream, where painful memories gather most. It was first experienced by Faolain and Caithe on their travels through Central Tyria. Ever since that moment, Faolain was unconditionally changed, from once being the brightest of the Firstborn, to becoming cruel and obsessive. Faolain was not immediately evil, however, as she had not fully succumbed to the Nightmare, and the Nightmare Court, until later, when Cadeyrn who had established the Nightmare Court brought her fully in.[13][14][15]

Like Faolain, all who succumb to the Nightmare become warped and twisted, their new selves craving the harm and death of others, though they still retain part of their original personality and individuality.[11][17][18] Though it is uncommon, some individuals like Gavin, may retain honor and act without malice.[19] How a sylvari may fall into Nightmare differs, but it is always a traumatic experience; the Nightmare Court attempts to recruit sylvari from various villages outside of the Grove. Those they recruit are then beaten and forced to torture those they kidnap and imprison.[20] There is no known "cure" for those who succumb to the Nightmare; however, it is possible for a sylvari who fell to Nightmare to close themselves off to it like a sylvari can close themselves from the Dream, becoming akin to the Soundless.[11] Similar to the Dream's Wyld Hunts, the Nightmare gives Dark Hunts to sylvari, missions that focus around spreading the Nightmare to other sylvari.[21]

Though no sylvari are born in Nightmare,[11] some are drawn to the Nightmare from the moment they awaken.[20]

In 1328 AE, nearly a year after the Elder Dragon Mordremoth awoke, he utilized his connection to the Dream of Dreams to send out his Call to all sylvari,[1] using the same channels the Dream and Nightmare use to send Wyld Hunts and Dark Hunts.[22] The Call consisted of whispers in the minds of sylvari, both as Mordremoth's own voice and as a voice that they cannot distinguish from their own thoughts.[23][24]