From Guild Wars 2 Wiki
Jump to navigationJump to search
Stub. Key elements of this npc article are incomplete. You can help the Guild Wars 2 Wiki by expanding it.
Reason: Missing biography.

This article is about the golem. For the dog, see Scruffy (dog). 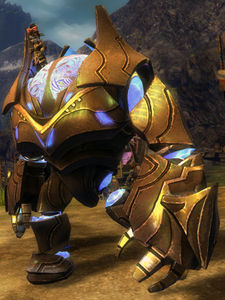 His name is Scruffy, and I built him from scratch. He's got some quirks, but he's also got some features no one else has even heard of. He's my conveyance, butler, and battle armor all rolled into one.

Scruffy is the name of Taimi's golem. Unlike many other asura, Taimi uses it both in combat and as a means of transportation.