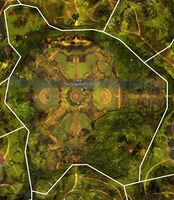 Map of Tarir, the Forgotten City

Deep in the wilds of Maguuma, under a canopy so thick that midday often seems like midnight, there is a shining golden city called Tarir...

Tarir, the Forgotten City, is the golden city of the Exalted. It was established by the Forgotten around two hundred years ago as part of Glint's legacy and plan to protect the world from the Elder Dragons. During the construction, the Forgotten chose humans from the earliest generation of Zephyrites to test in hopes of them being worthy of becoming guardians of Tarir and the purpose it holds. Those who passed the Forgotten's tests became the Exalted and finished construction of Tarir before going into hibernation for two centuries. During this time, Tarir remained dormant, waiting for Glint's Egg to come near.

The Exalted of Tarir awoke from hibernation in 1328 AE shortly before the Pact Fleet launched over the Heart of Maguuma. The magic built within the city awoke as Glint's Egg came near, ready to fulfill the purpose of guarding the egg.

Beneath Tarir lies a series of chambers made by the Forgotten to test the eventual champion of Glint's Egg. These were left untouched, and unknown, by the Exalted until the egg came near Tarir. Parts of Tarir, especially the Inner Chamber, hold structural resemblance to the Hall of Heroes with its heavy use of gold and stained glass.

The city of Tarir awakened by an Exalted.

Masks of the Fallen —

Section-stub. This key section of the article is incomplete. You can help the Guild Wars 2 Wiki by expanding it.
Reason: Missing dialogue from skritt on upper levels, and perhaps elsewhere.

Historian Landen: What have you found so far?
Historian Jasmine: What haven't I found? This place is amazing!

Historian Landen: Have you been able to determine the age of the city?
Historian Jasmine: Not yet. It's over a hundred years old, for sure.

Historian Landen: And you were so worried about coming here...This city is astounding.
Historian Jasmine: I was terrified that the Exalted were somehow related to the Mursaat, but there is no evidence to connect them.

Historian Jasmine: I was hoping to find more signs of the druids who once inhabited the jungle.
Historian Landen: Hmmm...

Historian Landen: These details, the level of craftsmanship... just incredible.

Obstructor Rora: You look too relaxed. Stay on your toes. We might need to fight soon.
Bartimus Swordheart: I'm always ready for a fight!

Researcher Vera: This is incredible—an entire city hidden in the depths of the jungle!
Explorer Johan: I know this is exciting, but we have to stay focused. This area isn't safe.

Researcher Vera: Imagine the knowledge that the Exalted must hold! I wish we had more time.

Section-stub. This key section of the article is incomplete. You can help the Guild Wars 2 Wiki by expanding it.
Reason: Not sure if the Sawgill Mushrooms spawn here too, if they do add, if not, remove tag