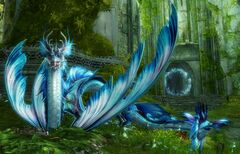 It's my honor to look after the people of Cantha. I discovered long ago that the best way to do that was from within, rather than without. Your kind need a sensible voice in your ears more than you need a dragon on the mount.

Kuunavang is a saltspray dragon. In the past, she played a pivotal role in helping human heroes save Cantha from Shiro Tagachi, a reborn assassin influenced by the fallen god Abaddon.

During the Jade Wind that occurred in Cantha in 872 AE, Kuunavang, alongside most other saltspray dragons aside from Albax, was corrupted by the proximity of the treacherous assassin Shiro Tagachi's magically charged death wail.[1][2] She was trapped under the Harvest Temple, formerly known as the Kuan Jun Temple, the epicenter of the Jade Wind and the location of Shiro's death.[3] The temple had also been the site where the champions Archemorus and Saint Viktor, who had helped defeat Shiro, had received their power from.[4][5]

In 1072 AE, human heroes traveled to the Canthan mainland and attempted to enter the collapsed Harvest Temple at the behest of Master Togo, the son of Emperor Kintah, who believed that the secret to the defeat of Shiro's vengeful spirit could be found there. Upon the group's arrival at Kuunavang's domain at the temple, she noted their presence and began to do battle with them, assisted by a number of plagued Afflicted who had been corrupted by Shiro's spirit. She threatened the heroes by stating that mercy was a human concept that the party would not find in her domain.

At a certain point during the battle, a gate to another portion of the Harvest Temple was opened. Kuunavang fled the battle, causing multiple Afflicted to appear as the heroes approached the gate. The heroes then attacked her again, and she flew through another gate, summoning more Afflicted to hold the heroes back. After Kuunavang had been weakened, the heroes entered the temple itself, and the saltspray dragon transformed into an enraged state. She then attempted to defeat them alone, and was finally defeated, freeing her from Shiro's grasp.

Upon coming to her senses, Kuunavang noted that she owed the heroes a great debt, also stating that she had resisted Shiro's influence, though still being controlled by him. After a hero replied that she owed the group no debt, Kuunavang advised them never to refuse a gift from one who could swallow them whole. As a reward, the saltspray dragon decided to grant them magic required to defeat Shiro.[6] After this, multiple Envoys, shepherds of the souls of the dead, appeared. They congratulated the heroes and explained that Shiro, who had been tasked with working as an Envoy as penance for his crimes, had betrayed their cause and wished to return to life. The Envoys notified the party that the Betrayer had only one more deed to commit to complete the spell for his revival: spilling royal blood related to Emperor Angsiyan whom he had slain in the Harvest Ceremony prior to his death.[7]

Kuunavang remained in the Harvest Temple, thanking the heroes that approached her. She eventually notified them that Master Togo had brought friends and enemies together—including the tengu Talon Silverwing, Kurzicks and Luxons—to besiege Raisu Palace, and stated that she would travel there as well to offer her assistance. Soon after, she followed the heroes to the palace, which Shiro had targeted, and alerted them that the Shiro'ken, constructs bound to Shiro, were approaching the palace. Kuunavang also noted that the heroes were fulfilling a destiny although she could not decipher what fate had in store for the party.[8]

When the heroes spoke to Kuunavang, she granted them a number of her celestial abilities that included summoning the spirits of the Luxon and Kurzick heroes Archemorus and Saint Viktor.[9] The spirits assisted the heroes in traversing the palace and reaching Emperor Kisu, who had been captured by Shiro. After the heroes had destroyed the Shiro'ken, they breached the Imperial Sanctum. They found Shiro standing over Emperor Kisu, preparing to strike the blow which would resurrect him. Togo, desperate to protect his brother, rushed towards Kisu and took Shiro's blow. However, the act allowed the Betrayer to return to life due to Togo being the half-brother of the emperor and thus having royal blood in his veins for the ritual to work.

Kuunavang followed the heroes into the Imperial Sanctum, granting them celestial abilities before attacking the now-resurrected Shiro. The group then charged in to avenge Togo, with Brother Mhenlo, Togo's student, noting that the celestial abilities seemed to be particularly effective against the spirits of the Mists which Shiro had summoned. After a fierce battle, the party managed to defeat the Betrayer. The Envoys reappeared and sealed Shiro, who had lost his Envoy powers because of his earlier resurrection, in a place in the Underworld as punishment.[10]

At the victory celebration that followed Shiro's defeat, Kuunavang explained that the Envoys had taken the Betrayer's spirit to an area where he would pay for his crimes forever. She then congratulated the heroes on their victory and returned to the Harvest Temple after the celebration and funeral of Master Togo.

After Soo-Won's passing, Kuunavang stayed in Arborstone where she occasionally chatted with the Commander and provided them with information about Arborstone as well as how she was feeling after everything that had happened. During one of these discussions she mentioned that the hole Soo-Won had left behind was being filled not only by Aurene but everyone connected to her. She also admitted that she longed for the company of Albax, one of the few remaining saltspray dragons not corrupted by the Void, and wondered if Albax could be convinced to join their side because past events had left him deeply scarred.

The Commander managed to find Albax and, after solving his riddles and proving to him that good luck still existed in the world, ultimately convinced him to travel to Arborstone. The two saltspray dragons were happy to be reunited and enjoyed each other's banter. They discussed Ishan's fate, whether others of their kind were still out there and if they should look for them, as well as how Kuunavang's scales had changed color after she had bonded with Soo-Won.

Section-stub. This key section of the article is incomplete. You can help the Guild Wars 2 Wiki by expanding it.
Reason: Add missing event involvement.

[Group Event] Defend the hatchery from the Void ambush (80)

[Group Event] Reclaim the Speakers outpost from the Void (80)

It is good to see you again, Commander. Can I assist you somehow?

You've done so much for us. Is there anything I can do for you, Kuunavang? (before completing Albax, the Unlucky)

You know, there is one of my kind I've been thinking about... Albax. It would be good to have him on our side. He will take some convincing, though, I'm afraid. Past events left him deeply scarred.

Understood. I've got another question.

How is it having Albax here? (after completing Albax, the Unlucky)

He is as grouchy and sardonic as ever, but... I think he enjoys being admired. And I enjoy our banter. Thank you, Commander.

Understood. I've got another question.

Can you give me some directions?

I know my way around a little. Where was it you were wanting to go?

Where can I sell or repair things?

You'll find the local merchant and repair station on the southeast side, bottom floor.

Where are the common areas? (after mastering Base of Operations)

The Kestrels tend to gather in the barracks and the mess hall. They are upstairs to the southwest.

Where is the Command Quarters?

The Command Quarters are to the southwest—an excellent place to discuss strategy.

Where is the temple?

The Remembrance Temple is to the north, on the second floor—to your right when you exit the stairs.

Where is the crafting area? (after mastering Crafting Center)

The crafting center is upstairs, to the northeast—except for the cooking and jewelry trainers, which are to the southwest.

None of those, somewhere else...

Where is the library? (after mastering Entertaining Amenities)

The library is upstairs and to the southeast. Try not to exasperate the head librarian, they are...touchy, I have found.

Where is the training area?

The training area is to the northeast, on the bottom floor. Keep an ear out for the sounds of combat and cheering.

Where is Club Canach? (after completing The Cycle, Reborn)

Canach has set up his colorful establishment in the cellar, accessible by going north outside of the building and following the tunnel to the right.

Where is the arena? (after mastering Entertaining Amenities)

The arena is to the northeast, up a small set of stairs. You may spectate, or you can join in the fray yourself.

Where is the community area? (after mastering Entertaining Amenities)

You'll find the fishing hole, gardens, and pond in the community area. It is to the northwest, outside the building.

Back to other options.

How are you feeling? With all that's happened? (after completing The Cycle, Reborn)

It's a new era, to be sure. I've seen many of them pass. Of course, the one thing that has been a constant...was her. But the space she left behind is filling.

With Aurene, you mean?

Not just Aurene, but...you all. All that she carried seems to no longer be so concentrated...

During Preparations
Everyone's starting to assemble—even enemies. And soon the great march south will begin.

It's good to see so many joining together.

[Group Event] Defeat Soo-Won (80)
We should take time to celebrate this victory, while remaining vigilant, ready for what is to come... And it will come.

We will be ready.