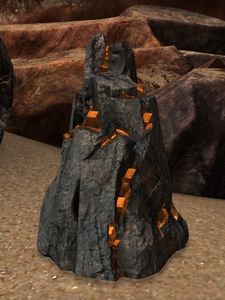 Orichalcum Ores are resource nodes found in level 75-80 areas. Both the common ore nodes and the rich ore veins can be mined at least 3 times, with the rich nodes having a 50% chance to give 2 ore per hit.

Like any nodes, the location of orichalcum veins changes each time the server resets. The respawn rate for the veins is just under 24 hours.

Anomaly:
The Orichalcum Node that can appear by the Elder Earth Elementals in Scalding Gorge, Draconis Mons cap drop shards and crystals instead of orbs.
Anomaly:
The Rich Orichalcum Veins in Domain of Kourna give 9 strikes instead of the usual 10.