Map of The Ooze Pit 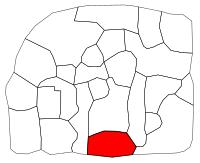 The Ooze Pit is an area within southern Grothmar Valley which has long been home to a large colony of dangerous oozes. Blood Legion has built a colosseum atop the pit where The Ooze Pit Trials are hosted, a challenge in which gladia may fight to prove themselves worthy of rejoining a warband.

[Group Event] Defeat oozes and deal with any obstructions (80)

[Group Event] Defeat the creature called from the Ooze Pit (80)

Section-stub. This key section of the article is incomplete. You can help the Guild Wars 2 Wiki by expanding it.
Reason: Missing dialogue?

In the central pit
Gladium (1): I took down twenty-five. No one's getting close to that.
Gladium (2): Well someone already did. Thirty!
Gladium (1): No! Well, you're still not close to Brimstone's record.
Gladium (2): One more round and I'm gonna wreck it!

After the Ooze Pit Trials
Gusta Wildfang: Can we get some skritt in here to clean up this mess? Don't worry, the trials will run again soon.