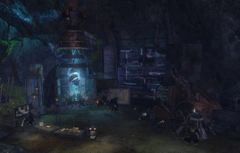 Recon Cove is a point of interest marking a secret cave inside the Shattered Steppes. It is the site of the real Ash Legion base of operations in Grothmar Valley, set up to investigate reports of resurging Renegades activity in the homelands. The Ash Training Course adventure can be found here.

At first, the player may be tempted to try the big locked gate accessible via the river west of the point of interest, but this is the exit. The entrance is hinted at by Malice Swordshadow during Revels & Rivals: "Oh, and Commander? The carvings will lead you. That's all."

Enter Malice's tent at the

Ash Legion Camp — in Devourer's Ridge. To the right of her (see below) is a small cabinet with four symbols carved onto it. Memorize them. The exact combination of symbols changes daily.

Now head south into The Wardowns. Scattered about this area are eight trees (see below) onto which a unique symbol has been carved; your job is to seek out the four whose symbols match the ones you found in Malice's tent and activate each tree in the correct order. You will hear a clicking sound if you selected the correct tree, but will be inflicted with burning if you select the wrong one or activated it out of order, and will have to start over.

Upon activating the final tree, a dialogue window will pop up informing you that a secret chute has opened. Enter it to access the Cove.

Bug:
The symbols on the cabinet do not appear in the Mac client.
Grothmar Valley
Retrieved from "https://wiki.guildwars2.com/index.php?title=Recon_Cove&oldid=2040109"
Categories: