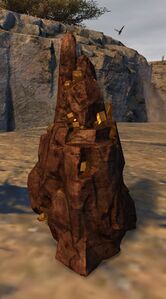 Rich Orichalcum Veins are resource nodes found in level 75-80 areas. They can be mined 10 times, and have a 50% chance to give 2 ore per hit. This node can't be found in core Tyria maps.

The total number of "possible" vein(s) are listed next to the zone name once known and confirmed. Each of the "possible" (random) Rich Orichalcum Vein locations in a zone are chosen from the list by the server and can change with each map instance. All of the characters on your account can mine the Rich Orichalcum Veins (they appear per character not per account). The locations below are all confirmed locations.