End of the world 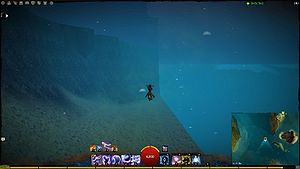 An End of the World effect in Bloodtide Coast.

There are two types of end of the world (EotW) effects a player can encounter within GuildWars2. An instanced EotW occurs when a player reaches the boundaries of an instance; in this case the game often alerts the player that they should return to the regular play-area of the instance. Certain instances will kill players wandering too far, whereas some will simply teleport them back. Reaching an instance EotW underwater will cause the popup message "You've hit a strong current and will be pushed back if you continue further." to be visible to players. It is possible to jump over a water boundary if you are high enough. 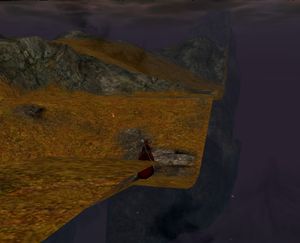 An End of the World effect in Fireheart Rise.

An open world EotW will present itself differently than an instanced EotW. Mainly, there are no popup message alerting players that they have left the map boundaries; instead players will begin to notice odd geometric features in the terrain, such as a straight cut end to the ground. Most map boundaries are surrounded by an invisible (or glass) wall preventing players from falling off the End of the World into the waters below the map.

Open World EotW are not limited to map edges, and can be found throughout any maps in area players are not intended to be. The addition of Gliders and mounts to central Tyria has made reaching such points much easier in certain occasions.