Mastering jungle movement will unlock the ability to hang glide to previously unreachable locations. When you train the Gliding Mastery, you’ll have the option to soar freely through the treetops, escape the dangers that await you on the jungle floor, use the air to your advantage in combat against certain foes, and save yourself from accidental death by slipping. 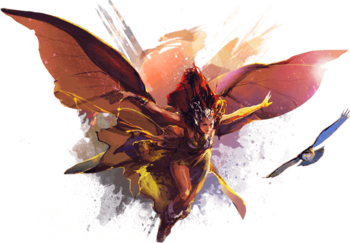 Gliding is a unique type of movement that allows characters to descend from one point to another. Originally available exclusively through the Heart of Thorns expansion, players with End of Dragons are able to unlock the base mastery.[1]

Gliders may be deployed in most open world maps, instanced content in expansions (e.g. story missions), and the Heart of the Mists outpost. Gliders cannot be activated in PvP maps or in Central Tyria instanced content (such as dungeons or personal story instances) and in many jumping puzzles. Further upgrades to the gliding mastery improve the speed, control and durability of the glider.

Gliders can only be used after learning the Glider Basics mastery by gaining enough experience and mastery points. Players with the Heart of Thorns expansion can start working towards their glider immediately, and after unlocking it they can further continue earning additional mastery upgrades.

Use the space bar while jumping to glide across gaps.

Players with the End of Dragons expansion can unlock only the basic usage of the glider, without having access to additional upgrades. The glider is automatically unlocked upon entering any zone in Cantha for the first time. Typically this is achieved by completing the Old Friends story step. Alternatively Teleport to Friend can be used to enter expansion zones. 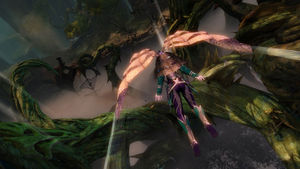 A character gliding in the Heart of Maguuma.

Once unlocked, gliding can be used by any character on the player's account. Provided that the player is not attempting to glide in a restricted area, marked by the

Gliding Disabled effect, the glider will be deployed either by pressing the jump key in mid-air, or by holding down the jump key after jumping; it will not appear if the player has not jumped far enough off the ground.

The glider will automatically fold-up when the player lands, or when the player "jumps" while gliding which causes the player to start falling. The player will be briefly revealed immediately following deployment and landing.

In PvP, gliding is not possible; in WvW, gliding is unlocked separately from PvE, through spending World Ability Points for the War Gliding Mastery, though Heart of Thorns is still required. Gliding is possible only in territories controlled by one's own world.

Only available after unlocking the

Only available in the Slay the octovine! (eastgate) boss fight.

The following skills can be bought (as account-wide unlocks) from Natto on the Soul's Vendetta in Bloodstone Fen or the airship circling the Harvest Temple during the Battle for the Jade Sea meta event.

Glider skins can be unlocked account-wide by purchasing them in the Gem Store or by crafting legendary back items which also unlock the glider version. The skins have only cosmetic effects; there are no gameplay advantages associated with them.