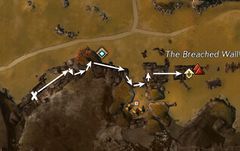 Wall Breach Blitz is a jumping puzzle to the west of the Breached Wall in Diessa Plateau.

Breached Wall Waypoint — ). To get to the puzzle you need to go the far western side of the wall (see map). There is a wooden scaffolding at the wall. To the left of it, stairs are going up. That is where you want to go.

Anomaly:
Unlike most Jumping Puzzles, this one ends with a Hero challenge instead of a chest.