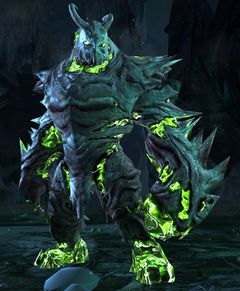 The Champion Unstable Abomination is a massive Icebrood Goliath imbued with both plant and death magic. This icebrood was created by Jormag using magic left from the death of Zhaitan and Mordremoth.

Section-stub. This key section of the article is incomplete. You can help the Guild Wars 2 Wiki by expanding it.
Reason: Missing skills
Retrieved from "https://wiki.guildwars2.com/index.php?title=Champion_Unstable_Abomination&oldid=2155820"
Categories: