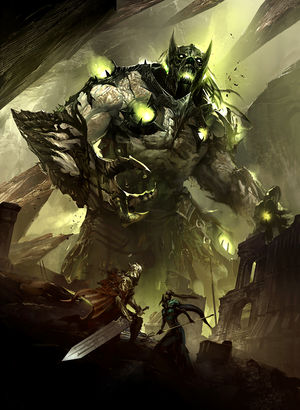 This article is about the extinct race of giants. For the foe that appears in Guild Wars 2, see Giganticus Lupicus.

The Great Giants, known to scholars as giganticus lupicus, were a group of gigantic ancient races that walked Tyria long before modern records began. Their disappearance from the northern continent in about 10,000 BE coincides with the last rise of the Elder Dragons,[1][2] and it is believed by the Durmand Priory that not only are they extinct in the northern regions, but the dragons were responsible for their extinction.[3]

Virtually nothing is known about their culture or history, and what little scholars do know about their physiology comes from the gargantuan skeletons that can be found across the world (although particularly in the Crystal Desert and the Desolation). Since giganticus lupicus refers not to one race but several, it is unsurprising that there is dramatic variance in the size and skull structure of these ancient skeletons. Priory scholars speculate that the great giants fought mostly with huge claws and feet.[4]

The only Great Giant to have been observed by the modern races was the Risen Temple Guard in the Ruined City of Arah. Given its relatively small size, it is likely that it was a juvenile member of its species when it was killed and corrupted into a Risen.