Atholma is home to the Olmakhan charr tribe and the giant Kaarg the Gentle on Sandswept Isles. The village has a busy market, sizable docks, the seat of power for the ruling body of elders known as the Council of Five, Lorekeeper Rhosan's hut which contains many scrolls detailing the tribe's colorful history, and the Ritual Grounds where celebratory dances are often performed by villagers.

Atholma was founded by the Olmakhan in 1121 AE after a five-year trek from the charr lands to the north. Like most of the coastlines, it was flooded in 1219 AE when the Elder Dragon Zhaitan rose and caused what the Olmakhan call the Great Flood, and has since been rebuilt. In recent years, shortly after the arrival of the Inquest to the south, an airship which the Olmakhan refer to as the Iron Whale crashed into the village and was used to reinforce the dwellings and the defenses.[1]

Participate in the celebration dance! (80)

Order of Shadows Agent [Bounty Board]

Elder Gawr: As Lifebinders, we spend our lives in service to the village.
Elder Gawr: The magic to heal wounds is much like the threads that knit us together.
Elder Gawr: We weave our powers—borrowed from nature—to protect, nurture, and restore.
Elder Gawr: Lose the self to serve the tribe. Only then can you mend that which is broken.

Olmakhan Villager: Assaults on the village, asura invaders... I've even heard there are undead roaming about!
Olmakhan Fisher: They're all intruders to me. I want them ALL gone.

Olmakhan Nightwalker: Have you seen the giant undead hound-looking thing wandering the islands?
Olmakhan Windcaller: First asura invaders, and now undead? This is getting out of control!

Olmakhan Earthstalker: What do you think those Asura are up to?
Olmakhan Windcaller: I don't care. But I'll be worm food before I let 'em push me out of my home.

Olmakhan Farmer: It's been some time since the last Elonian trade caravan.
Olmakhan Fisher: Blame the invaders. Ever since that cube appeared, trade has slowed to a crawl.

Olmakhan Villager (1): Elder Yowen, are we really going to war?
Elder Yowen: We cannot avoid it. The invaders have shown their true colors. To protect the village, we must fight.
Olmakhan Villager (2): Some have left; and some are preparing to leave.
Elder Yowen: And I don't fault them for it. We have to protect the little ones, and those who cannot fight.
Elder Yowen: But I will always defend this village. The invaders have forced us to bare our fangs. I'm not afraid to draw blood.

Lorekeeper Rhosan: And when you're done with that, you're to copy all of the scrolls written within the last two years.
Scribe: All of them? But, Lorekeeper...
Lorekeeper Rhosan: It's important to have redundancies! We can't afford to lose our history.

West of the docks
Olmakhan Fisher: Asura invaders. Undead interlopers. And now some sea monster that walks on land?
Olmakhan Nightwalker: That last one is just a myth. "Ironshell". It's just a tale fishers tell to scare the cubs.

North of the waypoint
If asura:

Near the Bounty Board
Order of Shadows Agent: Reports of creatures driven insane by ley energy are coming all over. Are you going to help?

Bounty Hunter: Seems like there's something to those tales about a deadly karka from the depths. Check the board if you're interested.

Bounty Hunter: There's a new bounty up for a hydra called, uh...Star—Star something. Not a bad reward if you can take it down.

Bounty Hunter: There's a crazed ogre who needs taking down. Only thing quicker than its hyena is its temper, so be careful.

Bounty Hunter: New bounty's come through! Looks like there's an oakheart in need of some pruning. Might be worth your while!

Bounty Hunter: Inquest lost control of one of their golems. Bounty's on the board if you're up for a little...disassembly. 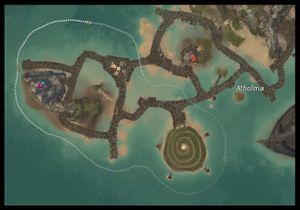