This article is about the general enemy. For other uses, see Eye of Zhaitan (disambiguation).
Spoiler alert: The following text contains spoilers relating to the story of Guild Wars 2. 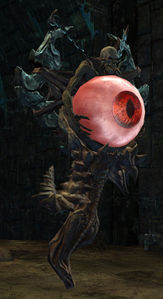 Eyes of Zhaitan are a type of high ranking Risen that serve the Elder Dragon Zhaitan as spies and powerful scouts across Orr.

Like all Risen, Zhaitan gains all knowledge and secrets they once knew. The Eyes are Zhaitan's most powerful servants, acting as its top generals, and also literally as its "eyes"; while most Risen are all but mindless undead, the Eyes seek Zhaitan's enemies as well as concentrations of magic it can feast on through the Mouth of Zhaitan. It is later revealed that the Eyes are the Old Kings and Queens of Orr, and that the cleansing of Orr proved pivotal to releasing them from their enslavement, effectively removing all of Zhaitan's greatest servants of its control.