The Great Krytan Blockade was the three-way battle between Lion's Arch, Kryta, and the Risen navy, that ultimately resulted in the official recognition by Kryta of the existence of Lion's Arch as politically independent of the Kingdom of Kryta.

In 1256 AE, King Baede of Kryta passed away and named Prince Edair as his successor. To solidify his position as future king and quiet any opposition in the Krytan nobility, Edair decided to reclaim Kryta's ancestral throne, originally destroyed by the Rising of Orr. The Krytan navy began assembling to the west and was willing to sortie into Lion's Arch if the city didn't sign over its authority to Kryta. The prince very publicly believed that the land had always been Krytan, and the sailors were squatting upon it without leave. Additionally, it was his opinion that the Captain's Council should have been paying him for the years they'd been living in Kryta without paying taxes.

Edair dispatched the Nomad II to Lion's Arch to lay out a set of terms: all human captains of the council would be paid ten thousand gold coins for their labors in rebuilding the king's land. They were offered lordships and titles if they swore fealty to Kryta. If they did not swear an oath to Kryta, they would quit Lion's Arch immediately, never to return. All non-humans were ordered by Prince Edair to leave the city without argument, quitting claim to any land, title, or authority in the city.

The negotiations were short. Representing the king was Captain Isaye Marriner and First Mate Tenzin Moran, and representing the Captain's Council were Isaye Marriner's estranged husband Commodore Cobiah Marriner, Commander Sykox Steamshroud, Captain Sidubo Nodobe, and Captain Hedda Svaard. Several options, such as requesting aid from the High Legions, were considered by the Captain's Council, and then quickly dismissed. When Isaye Marriner suggested trying to work out some sort of compromise whereby the non-humans could keep their wares or get some kind of recompense, the Commodore screamed at them to leave his city.

Meanwhile, Commander Steamshroud began to make provisions for those who wanted to leave to be able to do so by asura gate, but the gates had already been shut off. Lion's Arch was built on gold stolen from the Arcane Council when they built a gate in Divinity's Reach. The asuran colleges have always held a grudge against Lion's Arch for that. And sure enough, Edair had already negotiated with the asuran council. 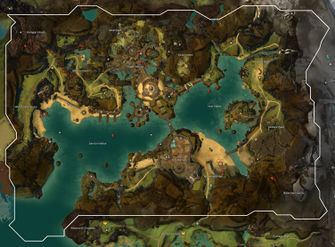 Edair had never planned to fight at sea. The Krytan navy would be outmatched by that of Lion's Arch, so instead he was going to blockade Sanctum Harbor, driving off all trade, and waiting for Lion's Arch to starve. That's when he'd send in the Seraph. Furthermore, Edair had not waited to see if Isaye's mission would prove fruitful. The Great Krytan Blockade was already forming.

Four nights after the Nomad II went out to sea, the Lion's Arch docks were set alight by four bandits, burning the ships from Macha's Landing to White Crane Terrace. They hurled bombs into the portholes of the Lion's Arch munitions ships, and one of the charr frigates there exploded, damaging the Gangplank. Soon after, the Krytan blockade, led by the Nomad II and the Balthazar's Trident set in. Before long every woman and child had been evacuated from the city to Hoelbrak, in the hopes that they could get to the mountain passes before the winter storms set in.

A month into the siege, Captain Yomm went missing, suspected to have temporarily re-enabled the asura gate. In fact, he had gone to Rata Sum to beg for the assistance of the Arcane Council, but they refused him aid. There, he encountered Macha, who wished to aid in the defense of a city she had formerly betrayed. Aboard the Nadir Shill, she set sail for Lion's Arch. That same morning, the Pride appeared, having managed to sneak past the blockade. They did so with the help of Isaye, who contacted Cobiah through them, claiming to have blackmail on Edair and expressing a desire to hand it over. In the black of night, Cobiah Marriner, Fassur Steamreaver, Aysom Steamhawk, and Bronn and Grymm sailed out aboard the Balthazar's Trident to meet Isaye aboard the Nomad II. There, much to their surprise, they were greeted by Prince Edair himself. Marriner and the Svaard twins were arrested and thrown in the brig of the Balthazar's Trident, and the prince ordered Fassur and Aysom be sunk with flaming arrows.

Edair brought the group in front of nobles for their surrender, but when Marriner still refused, he threatened Dane, Cobiah's son, whose existence he was not previously aware of. He gave them an eight-hour ultimatum to surrender the city, and the group were once more locked in the brig. However, before long they were freed by Master Exemplar Livia of the Shining Blade, who was still carrying out King Beade's final orders, namely that Lion's Arch must be kept sacrosanct so that the combined might of all the races can gather under one flag to fight Tyria's greatest enemy: Orr. As if on cue, bells began to ring above deck. Dead Ships had been spotted on the horizon.

On Livia's orders, the group made their way back to the Nomad II, dodging the Seraph as they went. At their fore sailed two great xebecs ( similar in design but much larger than the Harbinger) and the Indomitable, the Commodore's childhood ship, now the flagship of Zhaitan's navy. As morning broke, the Nomad II closed the distance between itself and the Indomitable, with the Svaard twins tasked with keeping the upper deck clear of undead. The ships exchanged a round of fire, but the Nomad II had managed to reach the Indomitable before they could fire a second round off. The Nomad II sunk her grappling hooks into the hull of her opponent, but were themselves boarded by undead, among them the Indomitable's First Mate Chernock, as the dragon champion Captain Whiting watched from his ship. Chernock made short work of Bronn, as well as injuring Grymm, who had to deal with his reanimating brother.

Outside the two ships, the battle was not going well for the Krytans. Each victory was marred by several defeats, and the pirates' prospects became infinitely worse when the battle was joined by the Maw, the leviathan that had almost wrecked the Indomitable just prior to the Rising of Zhaitan. But the Nomad II had been able to bring the Indomitable close to Claw Island. The Indomitable, unable to escape or do much against Claw Islands' guns, instead took aim at the Balthazar's Trident, while three smaller Dead Ships prevented it from retreating further. Desperate to stop the attacks, Marriner himself boarded the Indomitable in order to distract them with his presence. Sure enough, his old crewmates gathered around him, and Marriner was taken to Captain Whiting.

Just then, coming out from Lion's Arch came a fleet constructed from the hulls of all the ships used to build the town. The fleet was just as large as the dragon's, with anything available re-purposed into a vessel, under the orders of Commander Sykox Steamshroud. The arrival of this fleet turned the tide of battle, so to speak, and the area near Claw Island at least began to clear. The Indomitable began to retreat, but with Cobiah Marriner still aboard. Tenzin managed to get the two ships apart, and Marriner killed Whiting aboard the Indomitable. With the captain's death, the ship began to fall apart, and the Nomad II was itself barely afloat and unable to pursue it. Unable to do anything else, Marriner jumped in the water, and was rescued not by the crew of the Nomad II, but of the Balthazar's Trident. Aboard the Trident, Edair, now persuaded of the threat of the Dead Ships, asked Marriner to take command. In return, Marriner demanded that Edair break the siege on Lion's Arch, and Edair obliged.

The plan was to use the smaller pirate vessels to lure the Dead Ships to the Krytan line and then use the heavier guns aboard the Krytan vessels to blow apart the masts and shatter the rudders of the Dead Ships. The xebecs seemed to be smarter than most ships, though, and for those the Balthazar's Trident was going to have to engage them directly. Although the first xebec managed to get a few good hits in, the Pride came to their rescue, employing the same tactics as had been employed in the battle against Harbinger. The ship was torn apart, while Livia used her magic to prevent undead from coming aboard the Trident. As the second vessel came around, the Maw began striking the bottom of the Trident, threatening to break it apart.

Just as things were looking dire, the Nadir Shill finally arrived on its voyage from Rata Sum, accompanied by a fleet of illusory ships, distracting the Maw. This left the Trident and the Pride to deal with the last xebec. They used their sails to obscure the xebec's line of sight, lured it after them, and then split, causing it to crash on a concealed outcrop. While it was recovering, they both turned and fired their guns on it from both sides. The Nadir Shill had lost the Maw, however, and in a moment of reprieve, the Pride greeted her. Macha, however, used mesmer magic into tricking the crew of the Pride into boarding the Shill. She took the helm of the Pride, overloaded the ship's engine, and in penance for the betrayal she had exacted upon Cobiah some twenty years prior, Macha sacrificed herself and the Pride in order to kill the Maw.

In the heat of battle, Edair had agreed to submit to an independent Lion's Arch, recognizing the city's sovereignty as long as the Captain's Council were in charge.

Yomm proposed to the Arcane Council that Macha be awarded with the Inchantrix Luminus, their highest award of honor.