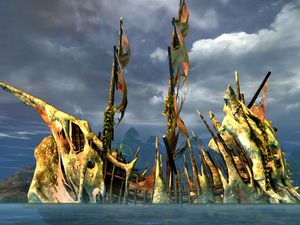 The Dead Ships are wrecked ships manned by the Risen and have come to prominence since the Elder Dragon Zhaitan's awakening caused the Rising of Orr. The fleet consists of ships from both Orrians as well as from the Risen's victims. Due to the ships' wrecked frame, many of them have been reinforced by large bones and rotting flesh, giving them the second name of Bone Ships. Dead Ships often sail beneath the waves, allowing them to surface in front of the enemy for a surprise assault. Many Dead Ships are armed with large Undead Tendril catapults, capable of launching various Risen when assaulting fortifications. 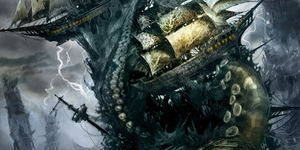