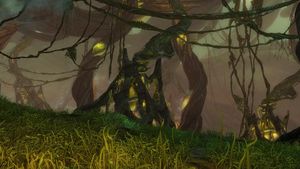 Blighting Trees are corrupted versions of the Pale Tree which function as large, powerful Mordrem-making factories for Mordremoth, the Elder Dragon of Plant and Mind. Five fully grown Blighting Trees can be found throughout Heart of Maguuma, each with a powerful Mordrem Guard to watch over it; in addition, three saplings and one tree in the process of being corrupted can be found.

Living bodies are placed inside a Mordrem Pod to create Mordrem versions of entities placed inside, while dead bodies are placed within Blighting Pods for the same purpose. Blighting Trees are capable of creating physically perfect clones of the individuals placed in pods, though made of plant instead. Living individuals placed in pods with strong personalities are known to leave remnants of such in their Mordrem clones.

Following Mordremoth's awakening in 1327 AE, Mordrem began appearing and spreading throughout the Heart of Maguuma in preparation for the invasion of Central Tyria. Blighting Trees became a key component in creating more Mordrem, and these trees appeared in various areas in the jungle where they were protected by Mordrem and, after the crash of the Pact fleet in 1328 AE, by the Mordrem Guard.

According to Taimi's theory that she postulated in 1329 AE, the other Elder Dragons consumed the death spectrum after Zhaitan's death, which allowed them to use corpses in the manufacturing of minions. Taimi suggested that the reason that Mordremoth was able to use corpses in the blighting pods was because of its consumption of the death spectrum.[1] [2]