The Glory of Tyria 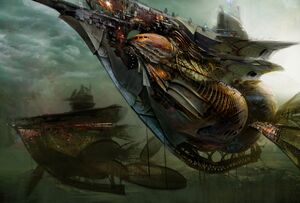 The Glory of Tyria is the flagship of the Pact's airship fleet, captained by Captain Gegnir Skyfarer, and, notably, the ship that defeated Zhaitan. The ship was a marvel of engineering, incorporating elements of asura, charr, human, sylvari, and even norn design. She was fitted with a MEGA-LIT cannon, a mist-cooled tripartate thautmatium energy weapon with a lead tracer array set for draconic energy designed by Zojja.

At the time of Marshal Trahearne's cleansing ritual in 1325 AE, the Glory of Tyria was unfinished, and she was not initially planned to be used in the final battle against Zhaitan. Instead, the Humble led the charge against the Elder Dragon with Destiny's Edge as her crew. However, the Humble sustained serious damage during the battle, and the Glory of Tyria arrived just in time to save her crew. The MEGA-LIT cannon was damaged during the battle for the Ruined City of Arah although not before crippling Zhaitan.

The Pact launched an airborne assault on the Heart of Maguuma to take down the Elder Dragon Mordremoth in 1328 AE with Trahearne and most members of Destiny's Edge aboard the Glory of Tyria. However, Mordremoth lured them into an ambush where it assaulted the airships with far-reaching vines while simultaneously abusing its connection to the Dream of Dreams to turn several weak-minded and unsuspecting sylvari to its side. Facing both Mordremoth's assault and the large-scale betrayal from sylvari, the airship crews were unable to protect themselves or the ships, and the fleet crashed throughout the jungle. The Glory of Tyria was among these casualties with most of her crew either killed or captured.

The Glory of Tyria's strongbox landed in the Noble Ledges of Verdant Brink.