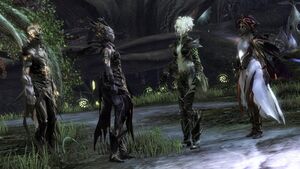 The Firstborn are the twelve oldest sylvari, those who first emerged from the Pale Tree in 1302 AE. They are respected among their race due to their age, wisdom, and experience. The Firstborn are equally divided between the four cycles.[1]

Caithe and Faolain were the first sylvari to leave Caledon Forest to explore Tyria.[2] Other Firstborn left later, including Riannoc (on his Wyld Hunt to kill Mazdak the Accursed), Trahearne (to study the Ruins of Orr), and Dagonet (as ambassador to the humans in Divinity's Reach). Most of the others were content to remain in the Grove.

The Luminaries are a group of four Firstborn, one from each cycle, who act as governors for the race. Though all the Firstborn are considered wise and authoritative, the Luminaries are in charge of maintaining society and guiding the sylvari as a whole; they protect and develop the Grove, maintain political relationships with other races, and provide mentorship to younger sylvari of their own cycle. The title of the Luminary is independent on the awakening order.[3]