This article is about the foe encountered in the personal story. For the foe during Victory or Death, see Mouth of Zhaitan (legendary). 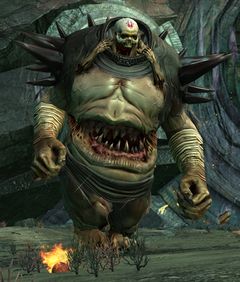 Everything is prey for the dragon. Surrender. Accept your fate.

The Mouth of Zhaitan is one of Zhaitan's most powerful minions, only two known Mouths of Zhaitan exist, but it's unknown if they existed at the same time. The Mouth of Zhaitan is a specialized dragon champion that devours magical items so Zhaitan can feast on their power. It is named after the fact that there is a giant horizontal slit in its gut that forms a mouth, which is how it devours the magical artifacts. Unlike the Eyes of Zhaitan, it is never specified what the Mouths were before corruption, but it appears to be made out of more than just one being as an extra pair of hands can be seen gripping at its collar. Its real head is also missing its lower jaw, indicating that it speaks through the mouth in its stomach.

Another meal for my master.
Submit to the will of Zhaitan!'
I sustain Zhaitan, and Zhaitan makes me strong!'
Stagger before the power of the dragon.'
You are nothing before Zhaitan's might.'