This article is about the world boss. For the event schedule, see Defeat Tequatl the Sunless. For the achievement category, see Tequatl. 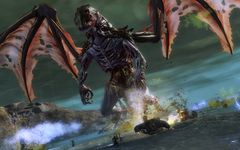 There's something in the water. Help!

Tequatl the Sunless is one of Zhaitan's champions and a World boss. Tequatl, whose name means "the one in darkness" in the language of the hylek (thus, with hylek calling Risen "the Sunless", its name roughly translates into "risen one in the darkness"), has long plagued the Splintered Coast of Sparkfly Fen, and is opposed by most uncorrupted creatures within the region.

At some point in time, Tequatl the Sunless likely died and was corrupted by the Elder Dragon Zhaitan, though it is possible, though unlikely, that Tequatl was still living when corrupted. It was imbued with much more of Zhaitan's energy than a typical dragon minion would, resulting in its status as a champion of Zhaitan.

Sometime in recent years, it began to menace the Splintered Coast, an inlet of the Sea of Sorrows, where it drove out local hylek tribes[1], scattering them and causing some to join orders such as the Vigil and others to move to the Zintl Holy Grounds, a village where many hylek of different tribes gathered together. It also polluted local waters, with elders fondly telling tales of the clean water to younger hylek.

Local Vigil and hylek banded together to drive off the beast, successfully causing it to retreat it off but not killing it and it would return shortly after being driven away.

In 1326 AE, Vigil tacticians reported that Tequatl seemed to have "evolved" and its attacks had become more elaborate as it learned from each encounter with the order. As such, it had become more difficult to fight. Warmaster Narru was dispatched by General Almorra Soulkeeper to investigate the reports, theorizing that it may have been a response to the Pact offensive in Orr. After Zhaitan's death, Tequatl became Unchained and grew in power, seemingly attempting to replace Zhaitan as an Elder Dragon.

Around this time, Tequatl's evolution was noticed by the Blood Legion tribune Rytlock Brimstone, who sent the gladium Rox to attack Tequatl and bring back its tail as proof. Rox, with the aid of the asura of the United Arcanist Lab, the quaggans of Brooloonu, the sylvari of Caer Brier and the Vigil stationed in the area, began to attack Tequatl. After a fierce battle, Tequatl was eventually defeated, a shard of its tail falling to the ground alongside a fang, fragments of its bones and an eye. Although uncertain, it is likely that Tequatl was canonically dead by this point, with at least Rox and Rytlock believing Tequatl to be dead.

[Group Event] Defend the Megalaser and the batteries in the east, west, and north (65)