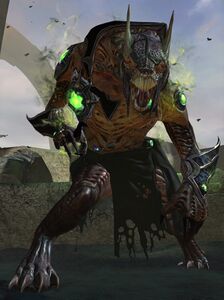 The Giganticus Lupicus was once the Temple's Guard of The Grand Temple of the Pantheon in the City of Arah, but is now just another servant of Zhaitan without a cause after the defeat of its Elder Dragon master.

In life, it was one of the Great Giants, a race whose extinction is thought to predate the arrival of the Gods on Tyria by thousands of years. As such, it is unknown how it came to be a Temple Guard in service of the Gods, or how it was affected by the Exodus of the Gods, the Cataclysm, or the Rising of Orr (saving that the latter ended in this creature's reanimation). It is also possible that the creature did not come from Orr originally, but was commanded there by Zhaitan post-reanimation to protect the Dragon's greatest secrets, but this still leaves the mystery of where it was from, and how Zhaitan obtained its corpse.

For a specific phase, please click on one of the following:

This phase occurs at 75% HP. The giant will stop summoning grubs and insects and will start attacking players more directly. While transitioning into phase two, he will infect the closest ally with a grub which is unavoidable.

During the final phase, the giant will switch from heavy-hitting "spread" attacks to more specialized life stealing attacks.